And I don't mean figuratively. The other day I converted some credit card bonus points into gift card credit for a store that won't receive free publicity unless I become sponsored by them (Target) and turned the gift card into a Topps 2011 blaster. The cards were all pretty generic but I was able to get a few needed cards from the base set and I think two inserts I needed.

Buried within the box though was a pack that felt a little funny. Of course within that pack there was a wonderful little goodie. An Aramis Ramirez  2011 Topps wooden bat relic! This was my first relic from the 2011 Topps Series 1 so I was pretty excited. I'm not a fan of the Cubs, but I'm a fan hits and the Topps 60 insert set. Looking at the relic and grain on the wood I feel like it's from the base of the bat, but could be wrong.

Ramirez started his career with the Pittsburgh Pirates in 1998 but since 2003 has been a fixture in the Cubs clubhouse. A two time All-Star he has been a fairly consistent 3rd baseman capable of putting up pretty impressive numbers. He has a .282 career average and in 6 out of 8 seasons has hit at least 25 home runs with plenty of RBI to go around.

With 1,046 career RBI 1,029 have been knocked in as a member of the NL Central Division ranking him 5th all time in division history. I'm not sure if the product of Santo Domingo in the Dominican Republic will ever catch the men ranked 3rd and 4th seeing as that is Albert Pujols and Lance Berkman, both of whom are still in the division and having a strong season.

This season Ramirez has continued to be passably consistent with a .290 average in 44 games but with only a lone homer to go with his 17 RBI, if he wants to catch Pujols and Berkman to be top man over Sammy Sosa's 1,296 he will need to pick up the pace. With the Cubs sitting 6 1/2 games back in the division with a 22-26 record I'm sure they would appreciate him bringing some more wood, maybe I'll have to send him back part of his bat. 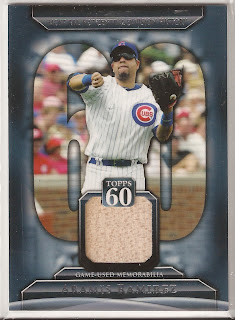