Or maybe I guess I should say the halo original. As I've made you all aware of the Angel 50th Anniversary and said autograph promotion I thought I'd put up a much delayed post. It was actually my first in person baseball autograph from the first Angel ever Mr. Eli Grba.

Eli Grba was the first selection in the 1960 MLB expansion draft, making him the first charter player of the Angels organization after being left unprotected by the Yankees. During his second season with the Yanks he posted a 3.68 ERA in 24 appearances with 9 starts. The Angels predicted good things out of him and he began the Angels inaugural season as a member of the starting rotation, and has the distinction of throwing the first pitch in the franchise's history.

Grba posted respectable but not outstanding numbers in his 3 seasons with the Angels (only 2 full seasons) and by 1963 his major league career was over. With the Angels he posted a 4.40 ERA with a 20-24 record in 92 appearances, 60 of which were starts.

Though never an All-Star, Cy Young Winner, Gold Glover, Silver Slugger, MVP, or the countless other awards given out throughout baseball Grba will forever have his name in the annals of baseball history. He may not have been a franchise cornerstone, but he was still the first piece of foundation for the Angels franchise to be built up from into it's current and future incarnations. For that I'm sure Angel fans everywhere will always be grateful. 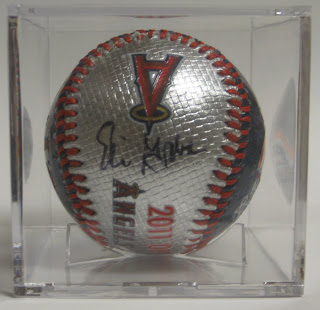 Mr. Grba signed this Angels commemorative 2011 Opening Series baseball for me at the home opener of the Angels 2011 season celebrating the franchise's 50th anniversary.
Posted by RJ at 1:35 AM