RBI (2) A few treasures from around the yard...

Well not really a yard, but the entrance to Angel Stadium at the Home Plate Gate Hats in Anaheim.  Today was the Angels' Yard Sale located under/between the famed New Era hats sized 649 1/2". 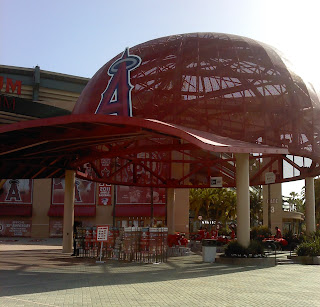 For sale was a selection of t-shirts, hats, banners, general merchandise, and select memorabilia items. As a season ticket holder my family and I would be allowed in before the general public with the other season ticket holder's meaning we only had to arrive at 6:30 AM to get a good spot for the sale's start at 9:00 AM. I was able to score a plethora of goodies such as this luckily obtained chair I'm blogging from (but in doors) at this moment. I had attended the sale with my parents and while I was in the memorabilia section looking for things my mother was able to land the final chair available! Talk about lucky... 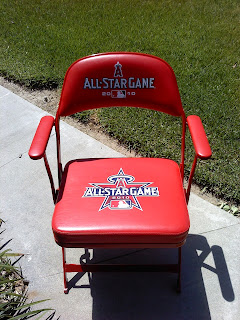 This comfy little item is one of the folding chairs used during the 2010 All-Star Weekend festivities when it was hosted for the 3rd time by the Angels. While I didn't get one a local article in the newspaper revealed some of the chairs available for sale were actually signed by players. Previously hosted by the Angels in 1967 and 1989, the National League went on to win the game raising it's record to 2-1 when the ironically American League Angels host the Mid Summer Classic.
While I was in the sectioned off memorabilia area I found one of Erick Aybar's Spring Training jerseys for sale. Needless to say I was quite pleased to snag the speedy shortstop's jersey just as the weather starts to warm up. 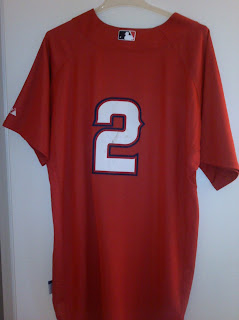 Aybar is the Angel's starting shortstop for the 3rd consecutive season after beginning to play with the club in 2006 after working his way up through the Angels organization.  His career year so far was 2009 when he batted .312 (8th in the AL) with 58 rbi, 5 home runs, 9 triples, and 14 steals. 2010 wasn't as good to Aybar as his average dropped to .253 but when on base he remained a menace to opposing pitchers ending the season with 22 steals. In limited playing time due to injury, 2011 has shown great promise for Aybar as he has stolen 4 bags while batting .353 over 13 games.
Another great pickup I was able to make was a game used Steve Soliz baseball cap. Thankfully Steve doesn't wear a New Era quite as large as the Hats the register was under, and we both wear the same size  fitted hat (7 1/4" all you trivia hunters). Unfortunately Steve and I don't quite wear the same size jersey and I couldn't bring myself to buy the on sale uniform. Maybe oversized shirts are good for yard work, but they aren't the best purchase at a yard sale. 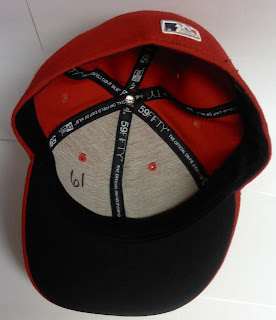 Steve is the bullpen coach for the Angels for the 2011 season after being the bullpen catcher from 2003-2010. So far he has done a great job working with the other coaches and players, helping the Angel's bullpen hold opposing teams to 22 earned runs over 76.2 innings for a 2.58 ERA in relief even with a rookie closer and several new additions to the pen. Keep up the great work Mr. Soliz, and thanks for numbering your cap so I can know it's yours, hopefully I'll be able to get him to sign it from the bullpen during the coming home stand.
In the coming post I'll reveal the second half of my haul from the sale.
Posted by RJ at 5:53 PM 1 comment: 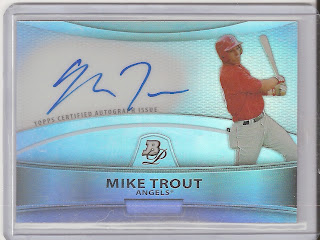 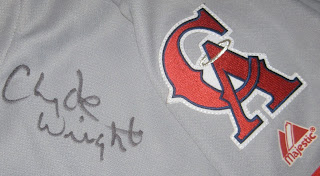