The Orioles are in the midst of a remarkable 2012 season fueled by an incredible streak of wins when the game comes down to 1 run or reaches extra innings. They're continuing a legacy of Orioles Magic that 3rd baseman Doug DeCinces is credited with helping bring to bear with a game winning 2-run shot he hit off the Tigers.

DeCinces was drafted in the 3rd round of the 1970 amateur draft by the Baltimore Orioles. He debuted in '73 and for 3 seasons had minimal big league playing time until '76 when he became a fixture in the line up and Orioles lore playing a career that eventually would have him inducted in the Orioles Team Hall of Fame. He would go on to be an Angel after the Orioles traded him to make room for Cal Ripken Jr. He would play for the halos and St. Louis before retiring after 15 seasons.

When he retired from the game he was a 1 time All-Star and Silver Slugger award winner. His career average would stand at .259 with a .329 OBP and .445 SLG that was boosted by the 237 Home Runs he smacked throughout his career. 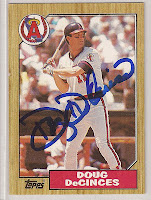 I got this Doug DeCinces autographed 1987 Topps card as part of the Angels 50th Anniversary celebration during the 2011 season at Angel Stadium.
Posted by RJ at 11:15 AM No comments:

Recently I did a post about top Angels slugging prospect C.J. Cron, as highly rated as Cron is within the organization he is actually ranked as the 2nd best prospect. In front of Cron is his Inland Empire 66ers teammate 3rd baseman Kaleb Cowart.

The switch hitting prospect was taken 18th overall by the halos in the 1st round of the 2010 MLB draft.  The Georgia native has found more consistent power and a better feel for the strike zone and can eventually prove to be the 3rd base piece that has been consistently eluding recent Angel teams.

After the trade for Zack Greinke the Angel minor league organization has been called a bit bare, but Cowart is not only ranked as the best halo prospect, but has been ranked by mlb.com as the 49th best prospect overall in the minor leagues to date.

I had Kaleb Cowart sign this mini bat for me at the same time that C.J. signed his when the 66ers were brought to visit Angel Stadium. If he gets called up it'll be nice to have a Kaleb Coward autograph already crossed off the list.
Posted by RJ at 10:20 AM No comments:

One thing that I'm a fan of MLB teams doing is trotting out their local minor league affiliates to the stadium to sign autographs, meet some of the big leaguers, and enjoy a night in the suites as a reminder of what they're pushing for. The Angels brought the Inland Empire 66'ers to the stadium to sign for the fans and I opted to rack up the minor leaguers while I could.

The 66'ers have top prospect C.J. Cron a 1st round pick in the 2011 draft, taken 17th overall. Originally a catcher due to an injury he moved to 1st though he isn't graded as much of a plus defensively. 2012 he has been on a tear driving in 123 RBI with a .293 average and 27 home runs. He's ranked as the Angel's 2nd best prospect and 2nd best 1st base prospect in the minors.

I didn't realize it was 66'ers day at the stadium or I probably would have gotten a team set of cards to get signed so I picked up a mini bat get the C.J. Cron autograph on. With Pujols signed for years and Trumbo mashing in Left/1st Cron is blocked for a bit but if he develops on pace when Pujols is ready to play DH more it would be about the same time the Angels are ready to see what Cron can do in the bigs.

It'll be interesting to see how things develop for C.J. but I'm glad to have gotten him at a sit down signing for a nice signature rather than a rushed one along the field. It was funny to see CJ get a bit of grief from his fellow teammates as he had a steady line of people with solo ball requests and cards of him while they signed team provided programs. Life in the minors is tough but hopefully when they were in the suites watching the game someone reminded the other guys that the future Hall of Famer in the on deck circle wearing #5 was taken in the 13th round of his draft and any one of them could still make it. It's possible he does now that CJ Cron was the Angels representative in the 2013 MLB Futures game.
Posted by RJ at 12:52 PM No comments:

I have to admit sometimes the thrill of the hunt is what drives me to grow my collection larger. I truly do appreciate every player who has ever signed for me and can recount who signed what where/when for every piece in my collection.

Occasionally though the pressure of maintaining my at home "hitting streak" does manifest itself and I feel compelled to ensure at least one autograph. On nights the streak may be over I feel stressed and uncomfortable until that lone hit clears the infield and drops safely. With an increased workload my opportunities to graph have decreased significantly, so the days I can autograph hunt I feel even more compelled to be successful.

So I field this question to you readers. Do you find yourselves often fighting off the irrational urge to hoard and maintain your ironman streak or is it easier to maintain focus on a specific collecting goal?
Posted by RJ at 12:48 AM 1 comment:

As many of you know I'm a pretty big Red Sox fan, and this year the Sox were only coming to town for one series. I had already gone to Fenway to join in celebrating the 100th Anniversary of Fenway park and decided to continue noting the historic season while they were in Anaheim.

To recognize the 100th year of the stadium I wanted to graph something more substantial than just a few ball or cards. I ended up purchasing an authentic seat back from Fenway park, certified by the MLB as having been Game Used. This is my 2nd baseball seat, which some would say is overkill but I like them. I opted for a red seat back and selected seat #6 also in honor of Johnny Pesky passing away this year. 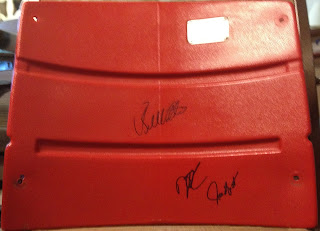 The first person to sign my seat was manager Bobby Valentine. Plenty of fans booed at me having Bobby V sign the seat and I'll admit I was hesitant at first when I was driving to the stadium coming up with the list of who would be seat worthy. In the end when this era of Sox baseball and the end of the curse is brought up the discussion will always end with "...and then Bobby V..." he's going to be an infamous name in the annuals of Sox historians and thus worthy of the seat. I will add my own complaint about Bobby V. since I took a silver marker for him to sign with but he wouldn't switch from blue sharpie and thus dictated how the rest of the seat needs to be signed. I mean maybe you don't want to switch sharpies between jersey's or cards...but it's a seat. Really Bobby V? 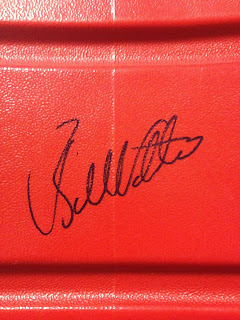 While he may not always be popular with the team I had author and Boston Globe writer Dan Shaughnessy sign my seat also. This was another person I had a quick moment of debate over but seeing as he's written multiple noteworthy books on the Sox and has covered the Sox as long as I can remember I opted to include him as a related personality.

The next person to sign the seat was Umpire Crew Chief and head of the Umpire's Union Joe West. West is not only a notable personality in the game but also involved in Sox history when he work Clay Buchholz's no-hitter from home plate and ended it with a called 3rd strike. 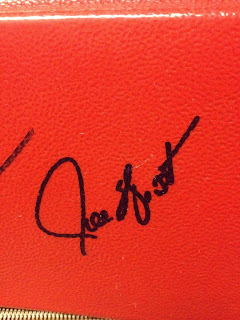 The final person to sign the seat for me was my favorite Red Sox player 2nd baseman Dustin Pedroia. Pedroia was a big score for me and work kept me from doing any pre-game graphing so when I heard he had signed for 2 people on his way in I was crushed. Luckily I was able to get his attention inside the stadium and he signed for me. I was really excited to get the AL ROY/MVP/Gold Glover/Silver Slugger and it's definitely a highlight on this piece. I'm not sure how many people can say they have a Dustin Pedroia autographed Fenway Park seat, but I'm one of the few that can. 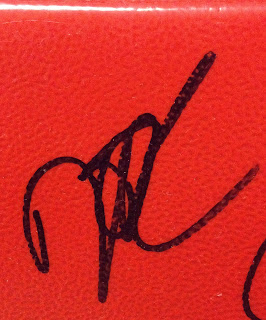 This likely be a lifetime piece that I will work on and it'll be interesting to see how this ends up one day when I'm old and have it on a shelf somewhere while I watch a game in retirement.
Posted by RJ at 5:11 PM 4 comments:

For a while I've been wanting to get into graphing basketball players. David does it, and he does it well with all his photos coming out pretty nicely. Being so close to LA with 2 NBA teams I suppose there's really no excuse for me to not try out a few events this coming season when baseball season lets out. But luckily I didn't have to go to LA for my first attempt at actually going to get a specific player. Minnesota Timberwolves guard Malcolm Lee is from my hometown and I knew he would be at an event so I printed out a few photos to try my hand at the NBA.

Lee was a 2nd round pick in the 2011 NBA Draft, taken 43rd overall by the Chicago Bulls and traded as part of a package for the draft's 23rd overall pick. An injury and the strike shortened season made his debut season limited but he has the chance to be a contributor on a developing Timberwolves team. Lee was drafted out of UCLA where he was on the 2011 Pac-10 All Defensive Team and All Pac-10 First Teamer. 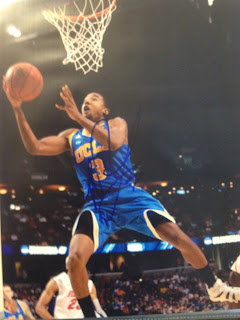 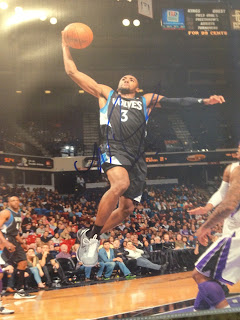 Malcolm Lee autographed these two 8x10's photographs for me. One is from his days as a star UCLA basketball player and the other from his time in the NBA. I'm happy to start my NBA collection with a local guy.
Posted by RJ at 1:59 PM 2 comments: