If you saw my earlier post I went to the UFC open workouts for UFC 157. I enjoyed the entire fight week making it out to the open workouts, went to the weigh ins to graph but ended up taking some photos with a few celebrities, the fan fest (I'll get to that eventually), the fight itself and one of the most interesting events of the whole week. Meeting UFC ring girls and cover models Arianny Celeste and Brittney Palmer was definitely an interesting event.

They had an autograph signing after the weigh-ins across from the Honda center for a few hours and I was able to get a bit of graphing in. I was lucky enough to meet up with Benson, James and a few other usual graphers at the event and we caught up while waiting to meet the girls. Everyone was way more prepared for the event than me coming with multiple 8x10's and magazines. I showed up assuming I could buy something for the ladies to sign from their line of products for about the same cost as getting an FHM magazine with quick delivery off ebay. I was correct and bought this poster to get signed. 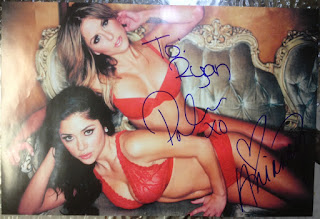 I'm pretty pleased with my purchase and how it turned out being signed. Despite being ring girls, I feel like they're pretty important personalities within the UFC and really help draw to the sport. Let's face it Arianny Celeste and Brittney Palmer are hot, and really active on instagram and twitter so they're definitely popular with the fans. I'm pleased to have scored their autograph, meet them, take a photo and bring them into my collection. Just saying, who is going to complain about having a poster of Brittney Palmer and Arianny Celeste in a bikini in their collection?

If you're interested in more gorgeous girls in posters and their autograph you check out my growing collection of Shay Maria posters here, here and here.

A side note. If you haven't noticed this off season I've been branching out from graphing just baseball. The TTM's have slowed down mainly because I'm slightly discouraged by my terrible return numbers, costs, and being overwhelmed by the project and work. The in person events have needed to be some sort of big event like the Cory Hahn fundraiser and Padres fan fest. I'm looking forward to getting back to graphing baseball, but I've been enjoying my break from it.
Posted by RJ at 8:55 PM No comments: 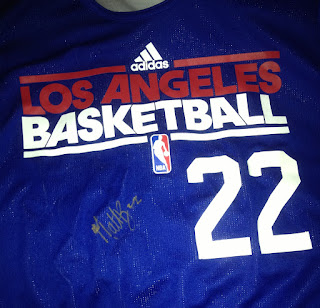 Now I'll just have to work on eventually knocking off the Randy Foye practice jersey I was able to pick up.
Posted by RJ at 11:21 PM No comments:

For the past few years I've been developing into a bigger fan of the UFC. Growing up my family always was sure to get big ticket boxing matches on pay-per-view, but when I left for college I was no longer able to go to the family get togethers and watch. The next best thing was watching UFC fights for free on Spike with my college roommates, and my roommates sister's boyfriend was a UFC fan also who would order the fights when it was a title fight.

UFC 157 is in Anaheim and I immediately splurged the day tickets went up for sale on what I hope to be a good seat. The open workouts were held today and I made the trip out hoping to get some autographs of the fighters on the main card. Of the 6 fighters who came, I was able to get 3 to sign an autograph for me.

The first autograph I got was fighter Ivan Menjivar. Ivan's a fun fighter to watch and crazily is a security guard at an airport. I know I'll definitely feel more safe when flying now that I know a professional MMA fighter is checking ID's. 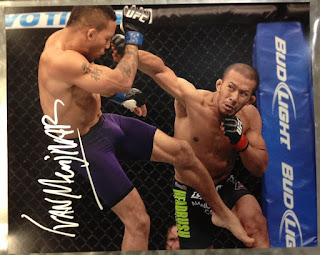 The next to sign for me was the legendary Dan Henderson who was nice enough to sign for most of the crowd and personalized all his autographs. Hendo is a serious name in the MMA world so I was shocked to see the rumors were true about how great a signer he is. This Dan Henderson autographed photo is definitely one of my favorites. 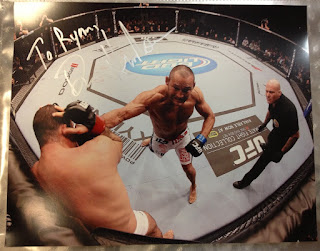 Finally I was able to get fan favorite Urijah Faber to autograph this 8x10 photo and he inscribed his nickname "Calif(ornia) Kid" on the photo. I'm definitely glad to have scored the former WEC champion and perennial fan favorite. 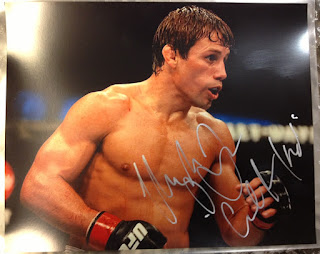 And because I can, here's a photo of the insanely awesome Ronda Rousey training photo I took. Rousey is fighting in the first women's UFC fight ever at UFC 157 to defend her title and I'm really excited to see her step in the octagon. After seeing her power and speed at the workout, I'm fairly certain she could fight here way to a title shot if she went against the men in the UFC. I was disappointed I couldn't get a Ronda Rousey autograph but I did eventually get one. 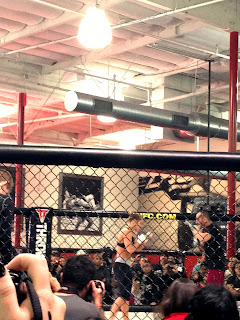 This was my first time trying to graph UFC since the fights are held all over the world and I wasn't really sure what to expect. I like that all the fighters signed even if not all of them signed very much, but they seemed for the most part willing to put their signature out there for their fans. Now that I have a better idea of what it's like graphing UFC I think I'll be better prepared next time and hopefully get a few more fighters and autographs. This was the first part of my UFC graphing experience and I'm glad I graphed the workouts, an Arianny Celeste and Brittney Palmer appearance, UFC fanfest and the fight itself. I want to throw a quick shout out to Steven from Zim's autographs who I hung out with at the event.
Posted by RJ at 9:58 PM 1 comment:

Writing TTM to the Padres at Petco

If you read my other post about Padres Fanfest then you know I went on a tour of the team's clubhouse.  What is actually really cool about their clubhouse is that there in the middle of the locker area are giant mailboxes with each player's fan mail waiting for them.

If you look at the photo you'll notice not too many of the players have been making a dent on their mail sent to the stadium over the off season, and judging by the size of some of those stacks not much of dent during the regular season either. 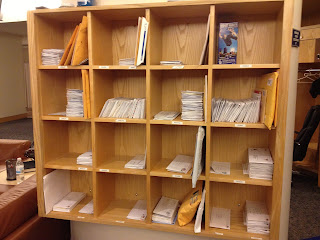 To those of you who have written to Huston Street care of the Padres, have fun waiting. It doesn't seem like he's going to get to you anytime soon. 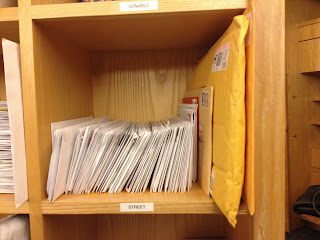 If you do happen to get a return from one of the players sent to the stadium, well I know I'd definitely value it a bit more.
Posted by RJ at 1:35 PM 1 comment:

With the combined score of the game being 65 points, The Diamond King wins the contest with the closest guess of 59 points. Email me your address and I'll send off some goodies! Congrats
Posted by RJ at 9:58 PM No comments:

Email ThisBlogThis!Share to TwitterShare to FacebookShare to Pinterest
Labels: Contest

I'm on the way to my families and inspired to put on a contest because I'm in a good mood from my ribs turning out how I wanted them to. Post your prediction on the final combined score and the person who gets it correct or closest without going over will win a prize TBA. Most likely some cards. Guesses must be submitted as comments here before 3:30 pst
Posted by RJ at 2:30 PM 6 comments:

Email ThisBlogThis!Share to TwitterShare to FacebookShare to Pinterest
Labels: Contest

I've said before how I enjoy seeing other bloggers points of view on the same autograph event, well I also enjoy seeing everyone's different view on specific players in their collection.

On this 8x10 of the Angels bullpen I was able to get Latroy Hawkins and Jason Irsinghausen. The most interesting of that duo would be "Izzy" who is a member of the 300 saves club. His membership in that should ostensibly have had me get him on a solo ball like many of my fellow graphers but personally I'm not too sold on it. I remember hearing my Mets fan friends continually groan when Izzy came lumbering out for another shot at the milestone only to blow it. History won't remember that when it looks back at a 2006 World Series Champion with 300 saves, 2 All Star appearances and 800 Strikeouts but I do. I obviously wanted his signature but I opted to work on a personal piece to remember the bullpen rather than the standard ROMLB. 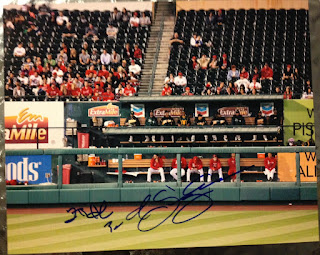 Every collection has its own highlights and focuses and to  be honest I'll admit parts of my collection seem disjointed at times. That's the best part of collecting though, everyone's collection is their own to do with as they please so long as it makes them happy with what they've snagged at the end of the day.

I was able to get Jason to sign this photo for me at Angel Stadium before a game.
Posted by RJ at 1:14 PM No comments: