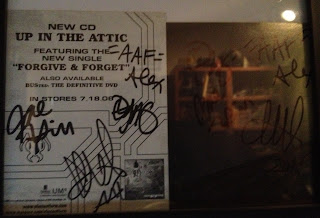 After I got to meet them I went back to the front to watch the show and it was great. They're actually really good live performers and can make every track really enjoyable. After they preformed there was an autograph signing inside the record store if you bought the CD. I had band members Dryden Mitchell, Joe Hill, Tye Zamora, and Mike Cosgrove sign a flyer for the CD release and the back of the CD jacket. They also signed a large poster for me but I gave that to a friend who also really likes the band but couldn't make it to the show. I figured 2 Alien Ant Farm autographs and getting to meet the band was more than enough for me and he could have the nice poster.
Posted by RJ at 1:51 PM No comments: 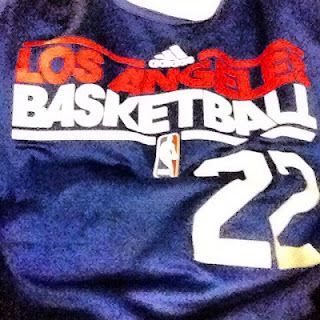 UPDATE: I was able to get the Barnes jersey autographed at an in store appearance.
Posted by RJ at 1:28 PM No comments:

Well I think it's pretty interesting that the guy behind this season's "The Catch" didn't win a Gold Glove. Frankly I thought he was a lock for the Center Field Rawlings Gold Glove considering how many highlight reels he made this year. Personally I think it's good for the Angels he didn't win his first yet seeing as it makes it easier to put Peter Bourjos in center with less fuss seeing as Bourjos is an overall better center fielder. Yeah yeah Trout's more exciting, but Pete makes plays look boring because he gets better reads and is fast enough to be sitting waiting for the same balls Trout has to dive for. In right field Trouty will earn plenty of awards.

One thing Trouty did collect though was the 2012 AL Rookie of the Year award. I've gotten a few Trout's signed and I think I'll just post the link to the 8x10 he signed here. Okay I can't just do that to you guys, I'll have to repost this 2010 Bowman Platinum autograph of the ROY Flying Fish. 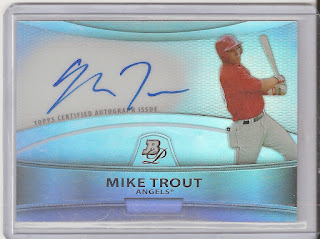 I'm sure that people are more surprised by Bryce Harper collecting the NL Rookie of the Year since Wade Miley put up such a strong finish. Sorry guys, but hype machines do end up working on occasion and Harper was red hot to help clinch the Nationals bid for the playoffs. I don't have a Harper autograph, so I settled for a graded 10 rookie card of him. I'd post a photo of it, but this post belongs to the fish. Sorry Bryce, but I'm going to be a clown bro.

Now on an unrelated note, I'd like to bring notice to this post at Baseball By The Letters regarding Virgil Trucks. Those of you familiar with TTM know he is an all star veteran signer. Or was. Health issues has unfortunately made it so Mr. Trucks is no longer able to correspond via mail. Mr. Trucks has been an amazing ambassador for baseball, and I as a fan owe him much for his kindness.

Per his request I am going to not only write a letter to Bud Selig, but also will be writing a letter and email to the Detroit Tigers trying to gain more support for at least a nice letter to Mr. Trucks offering their best wishes. We collectors owe him that much, or at least I do.
Posted by RJ at 10:09 PM No comments:

Well now that baseball is over it's time for some off season goals for myself.

Now that work has lightened up I'm hoping to power my way through a closer attempt at my 365. That's goal number one, first and foremost.

Secondly I'd like to pick up my other sport graphing by finding at least 2 events that can increase my collection of NBA and NFL autographed photos.

Third I'd like to track down some more memorabilia to have as goals to get signed during next season. It was satisfying finally being successful in getting my Erick Aybar to sign his Spring Training jersey, so I need to find some more things along those lines to work on.

Fourth I want to continue my poster project and design more ahead of time for specific visiting players so I'm not in a rush to design and print them. I'd like to have at least 10 posters designed for incoming players.