I still don't really believe that I'm writing this right now. Those of you who also read David's blog are aware that this Memorial Day the unthinkable happened. The New York Yankees were in town for a 3 game series against the Angels and I had pretty good luck before the game, but nothing compared to inside the stadium.

The stars all aligned and I decided to take off for a quick bite between when the players arrive and the gates open. When I finished eating my pre-game lunch I went to toss the empty wrappers and say hi to all the usual graphers. David and Benson were nice enough to slide me in the line with them as the gates got closer to opening (thanks guys). After we went inside we were able to see a few friendly faces and made our way to the Yankee dugout.

We watched the Yankees stretch and after Jeter started to do an on field interview. When the interview was over he came over to the fans calling for him behind the dugout and asked why we were there. The response of course was variations of "Waiting for you, please sign" and Jeter smiled and started to sign. Initially we figured he'd do one or two and disappear, but Jeter went down the line pointing out each person and would catch the item, switch pens and autograph it. The captain. Switching pens. Pointing at me. Epic.

As a Red Sox fan I will have to point out Jeter's toss back to me was a little short and I had to quickly lunge out and sprawl onto the dugout to prevent the ball from hitting the top and scuffing, but let's be honest he could have rubbed dirt on it and I wouldn't be complaining. Sox fan or not, he's Jeter. He's more than just a future Hall of Famer, or a World Series Winner, All-Star, Gold Glover, Silver Slugger, AL Rookie of the Year, Yankee all-time hits leader, he's an icon. 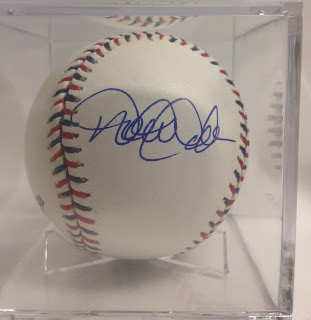 You may notice the stitching on the ball looks a little different than the normal ROMLB, that's because it is an Official 2010 All Star Game Ball. If you haven't been able to tell by the photo that's at the top of this blog, the 2010 All Star Game was a proud event for me, and I'm really happy to have related items signed. This Derek Jeter autographed baseball is definitely a highlight of my collection, and something that'll always be special to me especially since its a Derek Jeter autographed All Star baseball. Thanks again to a great day with David, Benson and the rest of the usual graphers.
Posted by RJ at 10:31 AM