I had the bat cut to the same specifications Mark Trumbo uses.

Basically this is going to be an evolving piece with players who accomplish something special in my eyes added to it. There are no firm rules for what it takes to make it on the bat, but I definitely have to have taken a shine to them.

First I had Mark Trumbo autograph the bat and he inscribed "All Star" under his name for me. I asked him to check to see if I got the specs right and after holding it and taking a half cut he said it looked like I got it right, which is definitely something I used to be happy about. 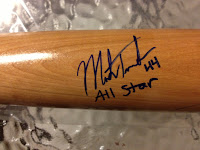 Steve Garvey autographed the bat and he inscribed "'74 NL MVP" for me on his bat. I know he played before my time but Garvey is one of those slick players that survived LA and I grew up hearing about every time a Dodger player made an error in the field. 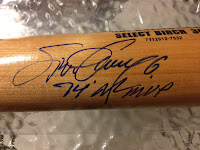 Tony Gwynn autographed the bat and inscribed "HOF '07" for me above his former teammate Garvey. Gwynn really needs no explanation for why I had him added to the bat. Hall of Famer who played in Southern California his whole career and was always great to watch play. Easy add. When I had him sign the bat I told him it was the same brand his son used and cut to Mark's specs. He started checking out the bat and told me he wondered how Trumbo could hit with such a monster. I was later told getting Gwynn on the bat was a great pickup as previous attempts to graph him on a bat have had him shoot graphers down if it wasn't his brand of bat.