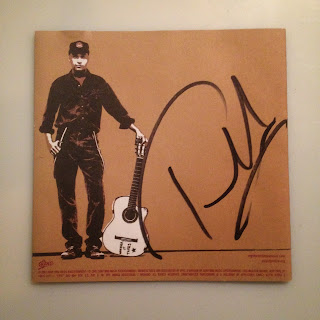 The club I saw him perform in the Paradise rock club was small and it was a very great intimate show. After the show if you purchased the debut album you could meet Tom and have him sign the album cover. I of course opted to stay and meet the man. It was a quick perfunctory hello and smile while he signed but considering he sat to sign minutes after playing a lengthy folk set I couldn't blame him and was happy for the opportunity to add him to my collection. It's not often I get to collect celebrity or rock star autographs, but it's nice when I'm able to so this Tom Morello autograph is a nice piece.
Posted by RJ at 8:31 PM