This is one of the graphs that makes me thankful that I live in Southern California due to all the great autograph opportunities. The Los Angeles Autoshow is one of the biggest and most important in the industry so vendors are sure to pull out the stops to try to draw large crowds. Kia for the past few years has leaned on drawing a crowd with its spokesman Clippers star Blake Griffin.

I went to the autoshow extremely early so I could make a full day of the event. I wondered the various booths and checked out the luxury cars before wandering over to the Kia booth. There was a line starting to form so I waited for Alex and Rob to come give me company. When they arrived we hung out and waited patiently for Blake to arrive for the signing scheduled from 4:30-6:30.

As we were waiting we saw the line grow. That's not unexpected to us. Apparently though it was unexpected to Kia as they had a small stack of small 5x7 photos that they were expecting to have Blake sign and hand out. However there were easily 400 people wrapped around the convention center going from the far left of the photo all the way around the Kia booth and wrapped back past the right side of the photo. And everyone was waiting for a chance to meet Blake for an autograph and photo op.

Since they were vastly under prepared for the crowd they made a surprising announcement that they'd allow you to get one item signed. One item that you could provide yourself. That's right. A free Blake Griffin autograph on an item of our choosing, not the standard provided Kia stock photo.

We couldn't believe ourselves and even when Blake showed up we still didn't believe it. Blake doesn't do signings besides the Kia appearance and the past 2 years he's only signed the Kia photo. Well it came down to it and Blake started signing autographs. 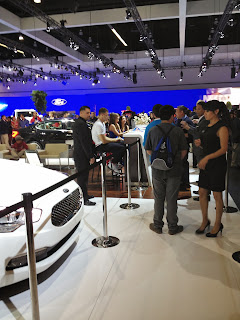 And what would you know it was true. The Kia booth was nice enough to have an employee who took a photo for you, and they were nice/smart enough to snap two to make sure it came out. I took my turn saying hello and then was able to my Blake Griffin autographed jersey. 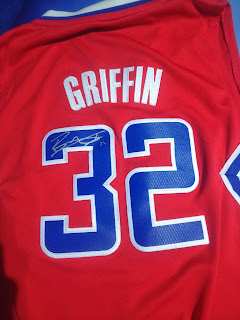 Getting Blake Griffins autograph was awesome enough, but I was able to get him to sit down and knock out a jersey for me instead of a small stock photo. It was a great day running into everyone, checking out some cars and not only meeting Blake but getting him to autograph my jersey.
Posted by RJ at 10:08 PM