Southern California native outfielder Brandon Barnes returned to his roots to put on the 1st Annual Barnyard Wiffleball Invitational at the Anaheim based The Office Sports Academy. The charity event featured a wiffleball tournament, raffle, silent auction, vendor booths and food truck all in support of the  Pediactric Cancer Research Foundation.

The cause is especially close to Barnes' heart as his younger brother had a condition which required treatments from 13 months old through the 8th grade to become cancer free. What was especially nice was the event got large press coverage, making the Astros' official MLB website and some television promotion prior to occurring.

Typically for events like this the promotional coverage doesn't always spread beyond direct sponsors or sites covering athlete appearances. Seeing the cause being discussed on a national scale is a huge success for Brandon Barnes. The event was well run and organized, appearing to be a resounding success raising significant funds through entry fees, raffle tickets and the live auction. Hopefully the event is repeated and further coverage can increase attention to the PCRF for more information about the foundation you can read it here on their site.

I got Brandon Barnes' autograph on this ROMLB and he was nice enough to inscribe the "Cycle 7/19/13" he hit for the Houston Astros. Now that he's moving to the Coors Field I think his offense will continue to shine. Barnes was kind enough to share a few moments to answer a few questions about his career and involvement with the PCRF which you can read here. 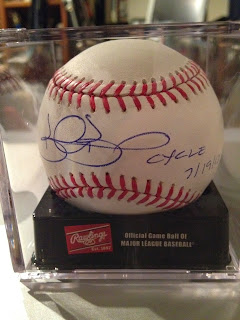 Barnes' rallied support from fellow Southern California natives and big leaguers Angels' infielder Grant Green and Oakland A's infielder Daric Barton to donate items and play in the tournament with him.  Barnes is in the far back and Barton is to the right behind the bar. 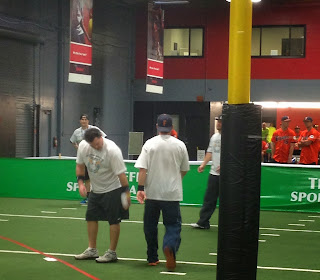 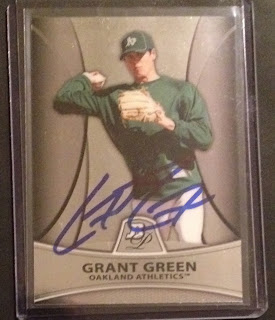 Though Daric Barton and former All Star Gregg Jefferies were there I didn't have any cards or photos for them to sign and I declined to drop a ball on them. After getting Green and Barnes' autographs they were kind enough to spend a few minutes being interviewed by me which I will post soon. When the interviews were over I watched some more wiffleball and hung out for the raffle before leaving since former Angels slugger Mark Trumbo was a no show and didn't make an appearance.

It was a nice event and I'm looking forward to seeing the PCRF and Brandon Barnes work together in the future. Hopefully Grant Green makes it a tradition to rock a neon bandana while playing.