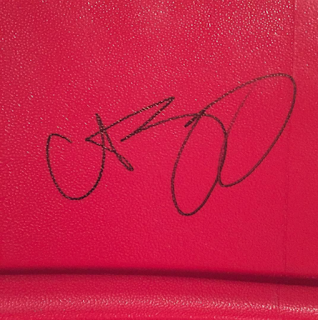 Schilling was making an appearance at Angel Stadium as a broadcaster so after an unsuccessful attempt to graph him earlier in the year I was determined to get him the second time around. Schilling  was kind enough to sign an autograph for each of us waiting for him and signed my setback with a large autograph that is very clear to see when I look at the piece. I'm very glad to have him added to the seat and it definitely muscles up my project significantly.
Posted by RJ at 8:28 PM