Well it's official the Angels have 4 selections in the 2012 All-Star Game in Kansas City, and they're sending some fresh fish to the game. And by fresh fish I of course mean 1st time All-Star 20-year old outfielder Mike Trout.

Trouty attended All-Star festivities before in 2010 at the Big A when he was a member of the 2010 XM Futures Game. You can read more about his minor league career and that game in RBI (1) In honor of the events across the pond...

A 2011 call up let Trout flash his Home Run power and speed, but he showed the need to make adjustments at the plate. His 2012 call up has been that and more and he has boosted his average and OBP by more than 100 points to be in contention for the batting title while demonstrating 20/40 potential. His call up has helped sparked the Halos to play some of the best ball in the MLB and push them in contention for a wild card spot.

I doubt this will be the last time Trout makes an appearance at the All Star game so I hope he gets used to not having a break come July. At least this year he will have some comfort having Mark Trumbo, Jered Weaver, and CJ Wilson along for the ride. 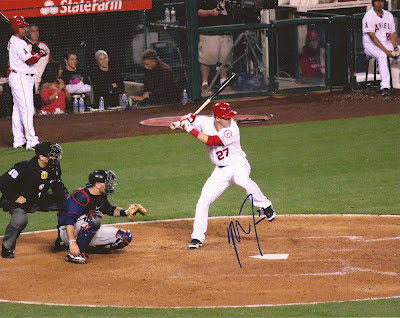 I was able to get this Mike Trout autographed 8x10 photograph in person at Angel Stadium before an Angels game and it's a great piece to have with the 2010 Bowman Platinum Mike Trout Autograph I already have.

Update: I'm glad I was able to get such a large photo signed considering how difficult it's become. Especially now that Mike Trout is officially the 2012 AL Rookie of the Year.
Posted by RJ at 1:56 PM