The Mike Witt and Mark Langston combine for a no-hitter call is one of my favorite calls in Angel team history. And every time the Angels take the field I get treated to it as part of the pre-game video introduction.

For those who don't know, Mike Witt is a very tough autograph to get a hold of. He's been notoriously rare to get through the mail and doesn't often do appearances. For the 2012 Angel Fan Fest, the team had Witt come out for the fans. He was really pleasant and nice to meet while signing and he sweet spotted my ball. He wasn't able to write his Perfect Game inscription, so I had a back up plan to make sure my run in with Witt remained a special one.

Mark Langston is a incredibly personable and kind signer, I've never seen him turning down a request when he's on the way to prepare for the Angels radio broadcast. That's especially special considering he had a very notable career as a 4 time All-Star, 7 time Gold Glover with 179 Wins and 2,464 Strikeouts. I had gotten Langston on a few cards, but I had something special planned to recognize his part in Angel history. After getting Witt I kept the ball in my car and the next home series ran to get it and had Langston not only sign the ball, but he was nice enough to inscribe "No Hitter" for me. 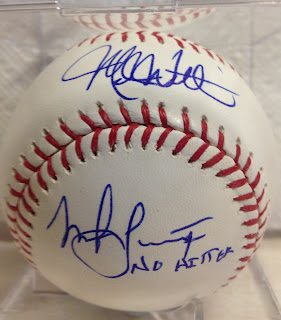 The game was special to Angel fans for a long time because until Ervin Santana's in 2011 no halo had tossed one since the Langston/Witt no-no in 1990. Langston started the game against his long time team the Seattle Mariners and tossed great 7 innings. Witt came in and finished the final 2 innings to complete the no-hitter.

Both guys were class acts and this is one of my highlight pieces in my collection.
Posted by RJ at 11:02 AM