Milacki was taken in the 2nd round of the 1983 draft by the Orioles, and made his MLB debut in 1988 with Balitmore. It was with the Orioles he gained most of his career's shine by pitching in two memorable games. In his rookie year he led the American League with 36 games started and posted a 14-12 record with 3 Complete Games and 2 Shut Outs.

On April 23, 1989 Milacki posted a complete game shutout against the Minnesota Twins, but did so facing only the minimum 27 batters. He wasn't credited with a perfect game or no hitter as he gave up 3 hits and 2 walks, but he was able to escape trouble thanks to coaxing 4 key double plays. The game was not only his first Shut Out of the season, but was also his first win for the year.

Two years later while still an Oriole Milacki combined with Mike Flanagan, Mark Williamson, and Gregg Olson to no hit the Oakland A's. Milacki had put up six scoreless frames with no hits, but had issued out 3 walks prior to being pulled by manager Johnny Oates.

Baltimore would be the highlight of Milacki's career as he left at the end of the 1992 season for Cleveland, Kansas City, Seattle, and a stint pitching in Japan. He would only make 22 starts in the 3 MLB seasons he played after leaving Baltimore, despite having 109 starts in his 5 years with the Orioles.  In 143 appearances, Milacki would post a 39-47 record with 8 Complete Games, 5 Shut Outs, 387 Strikeouts, and a 4.38 ERA. 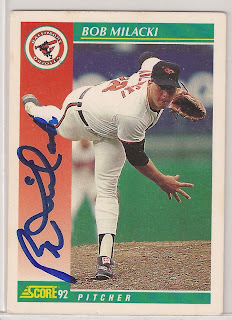 Bob Milacki autographed this 1992 Score card mailed to him at the Double-A Reading Phillies facility. He responded to me after 54 Days.
Posted by RJ at 6:19 PM