Well I've already posted a few items signed by former Angel pitcher Clyde Wright, but Clyde's such a great guy I've gotten a few more autographs and had a conversation or two with him while at the stadium.

I think sometimes we Angel fans take having a former Major Leaguer like Clyde so easily available to us for granted, but I definitely appreciate him being so ready to sign for fans. I especially appreciate him taking the time to put inscriptions on anything you ask him to. It's nice having an old timer who has such an accomplished record really show he's in it for the fans. I've never tried getting Clyde TTM since he's around the stadium so often, but I suspect he'd be a great player for new collectors to start with. I'm sure he'd be happy to write down the no-hitter if asked for it with your request.

The Angels had a TV special where Clyde is interviewed and he made one of his regular jokes about being in a rotation with Nolan Ryan. I spotted Clyde sitting out having a soda by one of his two BBQ stands in the stadium the home stand after I saw the interview and walked over to him. I told him I saw the interview and thought it was funny and as he signed for he told me the second part of his Ryan jokes. They go as follows and are even better when you imagine them in Skeeter's Tennessee accent..."What no one ever realizes is that between me and Nolan Ryan we had 8 no-hitters...he had 7 and I had the other." The second part was equally as amusing, "Between me and Ryan we had 6,000 strike outs. He had 5,700 and I got the rest."


When he was signing the bottom card I asked him to write the 100 Wins he finished his career with. Laughing Clyde started to sign the card and said "Yeah I'll write the 100 Wins, but only if I don't have to put the 111 Losses." Like I said, Clyde's a fun guy to have around and meet. 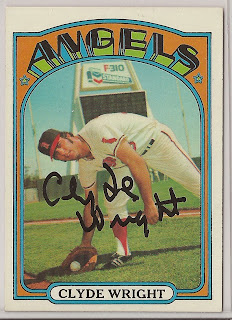 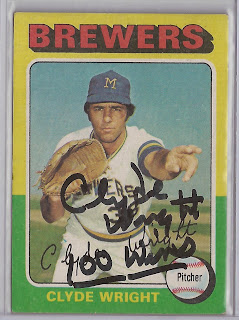 The Angel card is a 1972 Topps that I got at a card show, and the Brewers is a 1975 Topps I got through the Diamond Giveaway. Clyde signed these Topps cards on two separate occasions at Angel Stadium.
Posted by RJ at 9:40 PM