Okay well maybe it's not really a card of a literal star, but there are a few stars involved. Angel rookie All Star closer Jordan Walden's 2011 rookie star to be precise. There's a new star in Southern California and Anaheim is on the way to becoming "Wally's World 2.0" where the speed limit is 100 MPH.

The Texas native was taken by the Angels in the 12th round of the 2006 draft and is proving to be a bargain steal for the halos. The young closer previously had been working through the Angels' minor league rotations until 2010 when he was converted into a reliever. It was a short jump from the minor league bullpen's into the Major League club's pen at the end of the 2010 season.

2010 was a good beginning for Walden when he flashed promise in 16 games, including his first career save, racking up 23 Strikeouts to post a 2.35 ERA in his appearances. In 2011 he was to be a key part of the bridge leading to Fernando Rodney in the 9th, but Rodney's early struggles led to Walden being the club's closer a week into the season.

It's been a strong season for Walden so far with some analysts even putting him in the Rookie of the Year conversation with Michael Pineada and teammate Mark Trumbo. It's been so strong a season Walden was Mariano Rivera's replacement in the 2011 All Star Game, marking his first of hopefully many appearances in the Mid-Summer Classic.

The Angel's 50th Anniversary has had many celebrations for the franchise's history, the fans, and individual player accomplishment's. This has been a year of celebrating and establishing new milestones for the players and franchise, and on July 21st Walden etched his name into the franchise record books. When he nailed down his 23rd Save against the Rangers at home Walden set the new franchise record for Saves by a rookie.

The 2011 season has seen Wally post a 3-3 record with 26 Saves, 49 Strikeouts, and a 2.74 ERA in 48 games. Batters have only been able to hit .217 against him, and those stats are even more impressive when the controversial call at the plate during the Dodger's series is taken away. 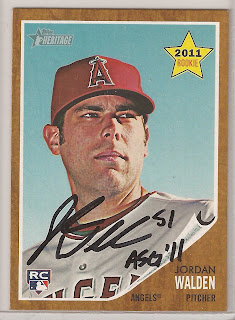 Jordan Walden autographed his 2011 Topps Heritage Rookie Card for me before the game he set the Angel's franchise record for rookie saves. Wally signed the card for me and as I was getting ready to put it away he was in need of a sharpie to sign for some younger fans. I passed him my sharpie back, and he was nice enough to put his number inscribe "ASG '11" on my card after he was finished signing for the kids. It was great to have him add that touch to remember his rookie year, and I really appreciated him taking the time to do that for me.
Posted by RJ at 12:02 PM