But not in the deli, Angel pitching coach Mike Butcher has his skills working with guys on the mound. Though I've learned that apparently Mike has some skills in the kitchen as last year he put out some pretty seriously tasty chili at an Angels charity cook off. It may help that he's had some professional help in the form of  his cooking assistant/sister-in-law who is a trained chef.

When it comes to pitching Mike needs no assistance as he's got a fairly extensive background in it and especially in Angel baseball. Mike's about as homegrown as they come considering his 4 seasons in the Majors were all spent with the halos as a reliever. In 115 games Butcher posted a 4.47 ERA with 96 Strikeouts, good enough for a 11-4 record with 9 Saves.

From 2000-2005 Butcher served as a pitching coach or consultant within the Angels minor league system before he was called up to the big show to join former Angel bench coach Joe Maddon in Tampa Bay for the 2006 season. Since the 2007 season he's come back home at the "Big A" as Mike Scioscia's pitching coach. Angel starters are thriving under his tutelage as they consistently are among league leaders in Wins, ERA, and Strikeouts. Fans have seen the consistent emergence of front line starters and homegrown relievers with Butcher in the system with Jered Weaver, Ervin Santana, Jordan Walden, and Tyler Chatwood being among the prominent names coming from the system.

Having Butcher as pitching coach is definitely something Angel players have acknowledged as a pleasant benefit of being in the organization. Ace Jered Weaver went so far as to acknowledging Butcher as positive reason for staying in his recent press conference announcing his extension. As an Angel fan, I'd hate to see Butcher developing the arms of the prospects emerging from the Texans, Rays, or Braves. 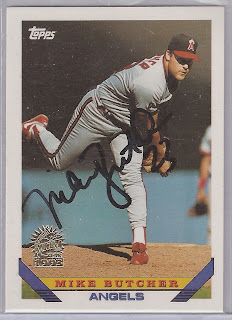 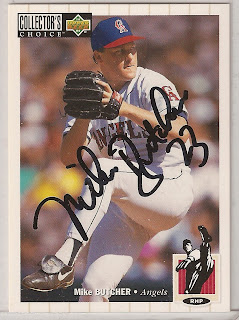 Mike was nice enough to go the extra step to sign these cards for me before a game at Angel Stadium. I asked him to sign them on the way to watch a Dan Haren bullpen session, but he had to get going and told me he'd get me on the way out. Unfortunately the session went on a little longer than normal and I got distracted by batting practice and wandered away from the bullpen area. Luckily when rookie Tyler Chatwood was warming up for the game Butcher had a free minute and came over when I called out to him. He told me "There you are. I was looking for you earlier," when I passed him my pair of cards.

Butcher has a really legible signature and I was pretty happy to see him take his time signing the cards. It's not too often I see anyone handing him a card, normally it's an Angel hat or ticket so I was happy to get these Mike Butcher autographed cards. I was especially happy about the cards, since I've had the Upper Deck 1994 card since I was 6 as a souvenir team set from an Angel game. The 1993 Topps card I was able to get through the Diamond Giveaway and there is a sweet little golden emblem marking the inaugural season of the Rockies embedded into the card.
Posted by RJ at 10:30 AM