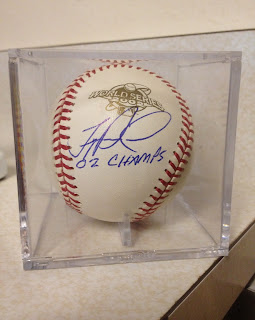 I had Troy Percival autograph this baseball and he was nice enough to inscribe "02 CHAMPS" on the ball under the World Series logo. The autograph and inscription came out nicely so I don't think I'll turn this into a 2002 team ball and will leave it as a Percival solo signed ball. The ball was actually a nice surprise my parents found when going through some old boxes that they picked up back when the team actually won the World Series so it was awesome to find a 11 year old baseball and get it signed by one of my favorite former Angels.
Posted by RJ at 3:31 PM