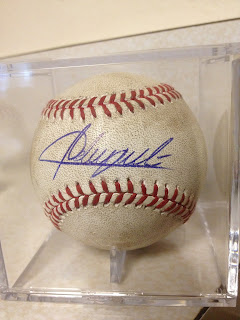 I was able to get Adrian Beltre's autograph on this baseball before a Rangers vs Angels game in Anaheim. The ball is actually my first baseball I've gotten from during a game with umpire Brian Knight being kind enough to toss me the ball at the end of the first inning of the Indians vs Angels game on the 19th of September, 2013. Since it was my first ball given to me actually during a baseball game I held onto it for someone special and one of my favorite players is definitely special enough for me to use on him.
Posted by RJ at 6:14 PM