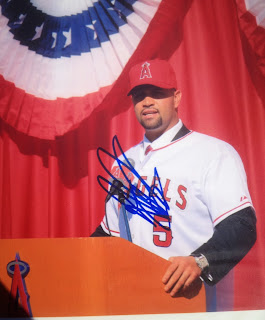 Albert signed this 8x10 photograph that I took of him at the Angels press conference after he signed as a free agent for the 2012 season. I was so excited to finally put the future Hall of Famer into my collection and it's a huge relief to finally knock him off the list after he signed this photograph at Angel Stadium. Talk about a great way to graph my last day of the season.
Posted by RJ at 8:16 PM