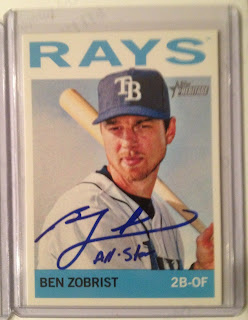 Ben Zobrist autographed this 2013 Topps Heritage card and was nice enough to inscribe "All-Star" when he signed it for me. I got Zobrist to sign when he came into town with the Rays to play the Angels during the 2013 season.
Posted by RJ at 7:46 PM