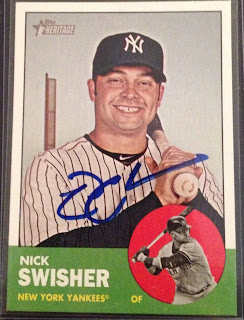 I had Nick Swisher autograph this 2012 Topps Heritage card for me when the Indians came to Anaheim to play the Angels during the 2013 season. You can find Nick Swisher's twitter @NickSwisher here.
Posted by RJ at 8:29 PM