That's right folks the Tim "King Fish" Salmon. Angel readers need no introduction to the King Fish, but the rest of you can enjoy the recap to the franchises' greatest homegrown player.

A native of Long Beach, the Angels took Salmon in the 3rd round of the 1989 draft. Salmon eventually made his debut in the bigs in 1992 for a cup of coffee in the form of 23 games.

The Angels would keep him up for the following 1993 season, and Salmon would overcome his 1992 difficulties to mash his way to Rookie of the Year Honors. The power would maintain throughout his career and in 1995, he was given the Silver Slugger award. Salmon would patrol the outfield for years, but in 2001 have a largely disappointing season as his elite power and average would leave him. 2002 would prove to be a bounce back year as the Fish would help the franchise win it's first World Series Championship, and he would claim the AL Comeback Player of the Year award. When he finally hung up his cleats after 14 seasons with the Angels he would have 299 Home Runs, 1016 RBI, .282 average, and an impressive .385 OBP.

When the Angels hosted the 2010 All Star Game they were sure to include Salmon in the festivities and he won the celebrity softball game's MVP award. He also flexed his muscles in a home run derby contest to wow fans with his ability to still drive the ball. 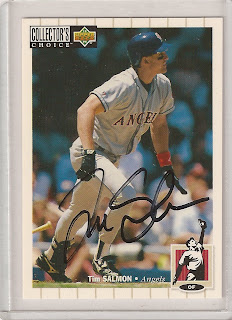 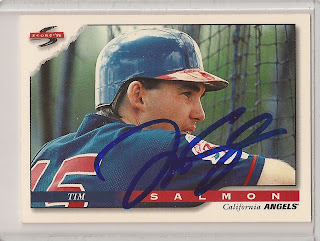 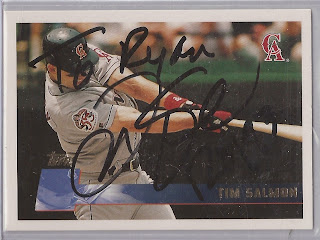 I was able to get Tim Salmon's autograph on those at Angel stadium during the 2011 season when he began doing pregame broadcasts for the team. The first is a 1994 Upper Deck, a 1996 Score, and lastly a 1996 Topps signed "To Ryan Tim Salmon ROY '93" When I asked Mr. Salmon if he could "Please sign 'ROY'," he asked "Why?" I couldn't think of a response beyond the most obvious and truthful, "Because you're awesome and it'd just look really cool." 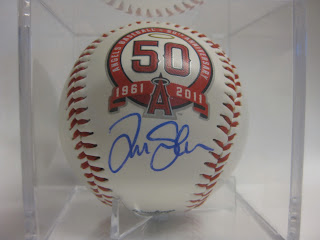 I was able to get this Tim Salmon's autographed ball during his signing during the Angel 50th Anniversary celebration.

There is some debate as to whether Salmon's numbers are worthy of entry into the Hall of Fame when comparing his numbers to those of his peers. However if you realize that he did them clean in a era of baseball highly in debate, it's a tough sell to deny him entry. Especially as a broadcaster he's been media friendly, so unlike some candidates there shouldn't be an overwhelming lockout for personal reasons/clashes. I wouldn't be surprised to eventually see him get a plaque in Cooperstown....except it won't happen via the BBWAA vote. On Salmon's first year of eligibility he was given 5 votes, well below the minimum needed to stay on the ballot. I like how 5 voters shared the same wave length that I did, but any trip to Cooperstown will have to be as a vacation unless the Veterans Committee decides to give Salmon a nod.
Posted by RJ at 6:19 PM