Well amidst the RTS that I've been seeing there was a positive that came in the mail. The 3rd return of the challenge is a nice big name, Texas Rangers outfielder Rusty Greer.

A Georgia native, Greer was taken in the 10th round of the 1990 draft by the Rangers. He wouldn't debut in the majors until 1994 playing in 80 games his rookie year. Once he made it into the bigs he refused to leave despite a rash of injuries hindering him throughout his career due to his hard nosed playing style. His put it all out there approach was highlighted when he made a diving catch to preserve Kenny Rogers' perfect game in 1994. Combining his strong offensive skills with high energy defensive play made him a long time fan favorite.

Through 9 seasons playing only for the Rangers he put up impressively consistent numbers despite the severity of his injuries requiring surgery. When he finally ended his comeback attempts his career average stood at .305 with an impressive OBP of .387. Not only did Greer consistently find a way onto the base paths he slugged his way through them with 119 Home Runs in his 1166 hits. For his tireless service he was inducted into the Rangers Hall of Fame in 2007. 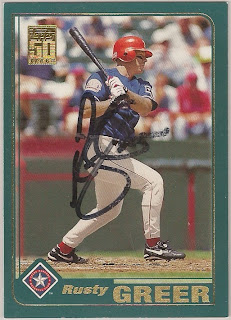 Rusty Greer signed this 2001 Topps card for me in only 16 days from his home address. I'm pretty disappointed in myself for the bad autograph. The card was the first of that year that I had and I didn't have a test card to play with. It's pretty obvious by looking at the signature that the gloss was stronger than I hoped. It seems like Greer started to give a nice one but scrawled the end as the sharpie had begun to streak and bubble. Considering I think of Rusty Greer as the Ranger counterpart to Tim Salmon during their playing days I'm pretty frustrated with myself with the autograph not being great.
Posted by RJ at 7:49 PM