Well we're on a roll and it's the second return from my first batch of letters in the 365 day challenge. I'm actually slacking a little on the letter writing because of work and going to an event that I'll be posting up as a part of the RBI Photo series.

The second return is a familiar face in the our collecting world, TTM all star Mr. Carl "Ersk" Erskine. Mr. Erskine signed with the Brooklyn Dodgers in 1946 and made his debut in 1948. While technically only one franchise, "Ersk" played for two teams during his 12 season pitching career, the Brooklyn Dodgers and the Los Angeles Dodgers.

A consistently solid producer, Erskine was a part of the core of the famed "Boys of Summer" era of Dodger baseball helping to win the Dodgers their first franchise World Series Championship. The year prior he earned his lone All-Star appearance in 1954. He would also author 2 no-hitters, against the Cubs in 1952 and the New York Giants in 1956. When finally ready to leave the game, Erskine would walk away with top tier stats from his era. He would sport a 122-78 record, 4.00 ERA, 71 Complete Games, 14 Saves and 981 Strikeouts.

Mr. Erskine was kind enough to send me a card from his personal collection since I wasn't able to track one down to send with my letter. I really appreciate him taking such an effort to increase my collection and it makes the reply that much more special along with answering my questions. 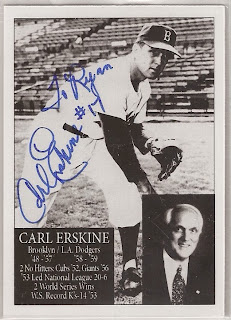 What do you consider to be your career season?
Considering how many great seasons he's had there were plenty for him to choose from and he elected, "1953 - League Leader 20-6, 3rd game World Series 3-2 game win vs Yankees 14 K's Record."

With 122 Wins were any especially meaningful to you?
A no-hitter is a quite the special and unique thing. Some aren't created as equal and some opportunities are unique to the time and place never to be repeated, "The Giant no hitter and winning the first game in LA."

Did you feel added pressure when you realized you were working on your second no-hitter?
Showing the old school mentality that I've found to be common amongst the men who played the game at a high level for sustained time Erskine responds, "No-Just one pitch at a time."

How did you celebrate each no-hitter?
Showing why he is a such a strong character guy, "Out to dinner with my wife and friends."

What was relocating the franchise like? Did it change how you played?
"It was a big adjustment for those of us who had already had our best years in Brooklyn. Pitching in the Coliseum was different than Ebbet Field."

Mr. Erskine was kind enough to send his custom card and respond to my letter from his home address after only 9 Days.
Posted by RJ at 9:00 PM