This past Saturday January 21st, Trinity Bat Company took part in hosting a charity Home Run Challenge to help former Southern California prospect Cory Hahn's family after a tragic injury during his second collegiate game. Trinity Bat Co. combined with sponsors such as The Inland Empire 66'ers, the Rex Hudler Wonder Dog Show, Chick-fil-A, and to help raise awareness of Cory's unfortunate situation and of the great lengths he is going to stay positive and an inspiration to those in tragedy. Trinity has gone so far to offer a Hahn model bat with proceeds going to assist Cory's family with the rising costs of the tragedy.

The Home Run Challenge had categories for people of all ages, but the main show was the professional players who came out to support. The showing was actually pretty impressive with a large sized crowd coming to support the Hahn family. A ticket into the event actually got you a fair amount. You got 2 tickets for a raffle featuring items such as autographed bats, jerseys, balls, and even custom framed autographs. Chick-fil-A gave away coupons for free food, free sandwiches and sweet tea, and players were very friendly about signing autographs for those who asked.

Even though it was a little overcast in the morning, the sun came out and beside a light breeze it was a nice day out there to hit. Prospect Matt Hobgood of the Orioles took the first at bats for the pro's. 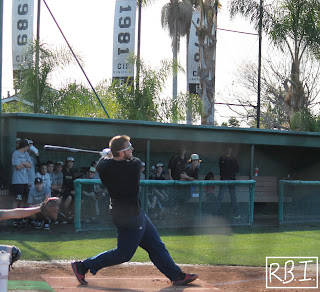 Matt was followed up by prospect Nick Ramirez. 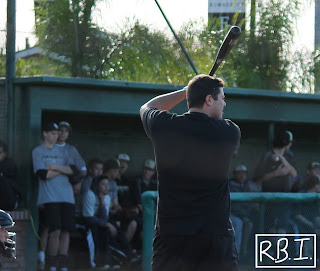 Even though the show had been impressive to that point, it was time to "pop the chain" and YouTube sensation Domingo Ayala went up to the plate. It was pretty funny to watch him bat in person and watch him actually crank one out.

After Domingo warmed up the home crowd, Angels catcher Hank Conger took to the plate to showcase some of the muscle we'll hopefully see this coming season. 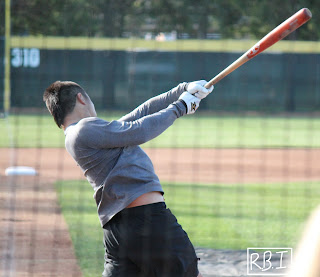 Trace Thompson of the White Sox system was next up. 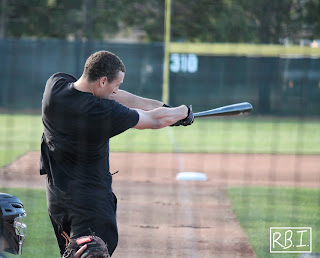 Aaron Northcraft a prospect from the Braves also took up a bat. 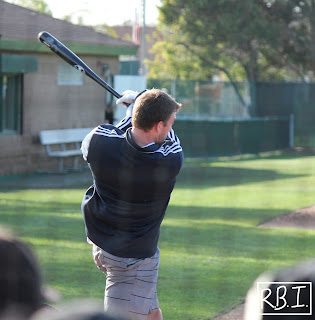 Padres prospect Austin Hedges was the final participant before they cycled through to hit again. 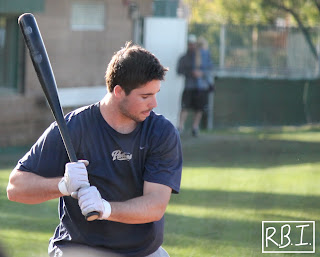 The show was so entertaining that former Angel player/broadcaster Rex Hudler couldn't resist popping on the announcement system for a  few high energy words. 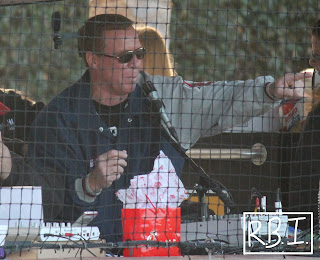 He was so energetic that the 66'ers mascot couldn't stop himself from going out into the outfield to try and shag a few flyballs too. 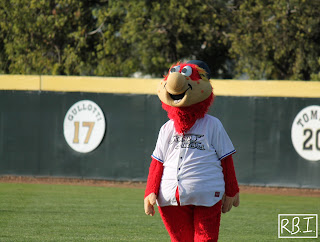 Part of the draw was from Conger announcing he was going to be hitting bombs and the 2011 Angel contender for Rookie of the Year Mark Trumbo announcing he would also be in attendance to sign autographs though he couldn't hit due to injury. Mark sat down to sign an item for each fan that stood in line, taking his time to give an actually very nice signature. 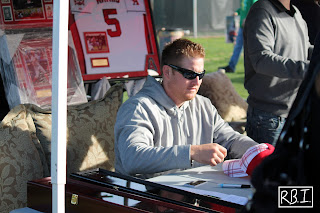 There was also a surprise guest who appeared to watch the festivities and show his support.  The Pittsburgh Pirates choice with 1st pick of the 2011 MLB draft, Gerrit Cole. 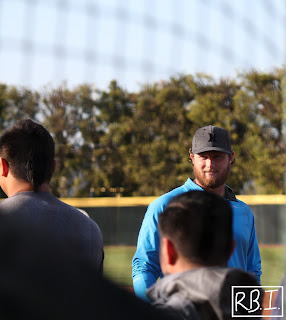 It was a very nice event, and I'm glad there was such a strong showing for the Hahn's. Definitely worth making the trip out there and see the prospects, and more importantly the community of regular autograph collectors from Angel stadium. A great day that made me anxious for the coming season. To read about the 2nd Annual Trinity Bat Company Home Run Derby and Cory Hahn benefit you can read it here.