It's not often that as a fan you have access to a former player, that's part of why TTM collecting and getting letter responses is so special. It's even less often that the player is someone of the top tier. I was able to have a few opportunities to get closer Troy "Percy" Percival's autograph.

The Southern California native was taken in the 6th round of the 1990 draft by the California Angels. Originally drafted as a defensive catcher, Percival eventually made his debut in 1995 as a pitcher when coaching staff members realized his throws back to the pitcher were faster than the actual pitch. When Percival debuted in 1995 he stayed with the big league club making a astounding 62 appearances his rookie year. Since his call up he was a reliable anchor of the bullpen as a career closer.

For his 14 season career he would play primarily for the Angels but would spend the end between the Tigers, Cardinals, and finally the Rays. Injuries would make closing a difficult task, but clubs continued to bet on the ever reliable "Percy" in hopes to find a diamond in the rough. Eventually he would retire and end his comeback attempts with stellar stats. 8th all-time with 358 Saves,  Percival would have a career 3.17 ERA to go with 781 Strikeouts and a 35-43 record. He would be be a 4-time All-Star and member of the 2002 World Series champion Angels.

The 8th and 9th inning would always be the favorite part of the game for me when Scot Shields and Percy would come to lock down the game and send the Angels home with a win. Knowing Percival came from a mere 20 minutes away also made me root hard for the hometown boy. I also know he has been active coaching locally for his son's team and helping coach at a local high school. I'm really appreciative he's giving back still to Southern California baseball. 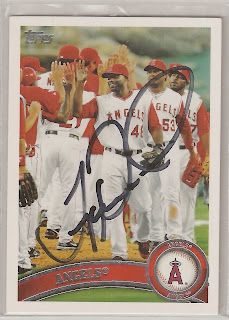 I sent this 1996 Score card to Percy's home address, I love the trademark expression he's making in the action shot. It always looked like he was excited to bare down and make the pitch count. Percival was nice enough to sign and return the card in 61 Days. 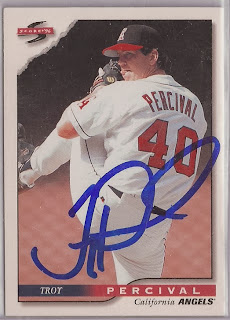 The crown jewel though was this ball. While at an Angel game I heard from a friend that Percy was actually in attendance and they knew where he was sitting. Deciding to not intrude on his game experience we watched the game away from his section, and waited to ask him if he could sign for us on his walk out at the end of the game. Percy didn't seem to mind signing for a few people on his way out and was really nice about it, even sweet spotting it unprompted. Its one of my favorite autographs and I'm really happy to put this Troy Percival autographed baseball in my collection. The ball is a game used certified by MLB from Jered Weaver to Russell Martin foul ball from the September 9th, 2011 Yankees and Angels game. 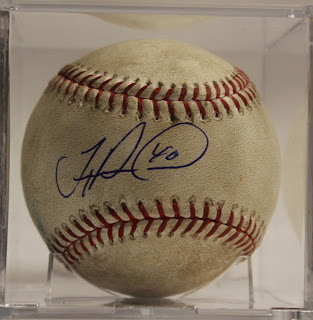 I'm not sure if the Angels will retire his number or add him to the Angel Hall of Fame, but if I got a vote he'd be in there for sure. He is a member of the Angels Hall of Fame by being a member since the entire 2002 World Series team was inducted but I hope they add him individually. I also got a Troy Percival autographed World Series baseball and it's a nice piece to go along with the other Percival autographs I have.
Posted by RJ at 2:51 PM