Most of you who are regular readers probably have a pretty good inkling that I have a short attention span. I'm one of those guys with a million different projects going at the same time to keep myself occupied. Well I've decide to try out a new project within this hobby. I tried to design custom cards, but kept feeling like I was ripping off Topps or my fellow collectors. What could I use my already existing skills to do that would be fun, challenging, baseball related, and contribute to my hobby?

Welcome to my poster project. I'm not sure how far I'll take this, but while I'm on this kick why not dive right in. He's the half of 'TnT' who hit's Trum-bombs/Trumbo Jacks, Angels slugger Mark Trumbo is one of the first results of my new project.

Trumbo was taken by the Angels in the 18th round of the 2004 draft and debuted as a pinch hitter for Mike Napoli in 2010. With Napoli traded away and Kendrys Morales not healthy from his freak injury after a walk off grand slam a strong spring propelled Trumbo to the 2011 starting 1st baseman position and his rookie season was incredibly strong with Jeremy Hellickson stealing his Rookie of the Year award in the season's final stretch.

2012 saw the addition of Albert Pujols to the Angels but this didn't slow Trumbo down as he finds at-bats playing 3rd, DH, and both corner outfield spots. He was a 2012 All-Star and selected to compete in the Home Run Derby. He's going to be a big part of the Angels' future and I'm sure he'll keep knocking Trumbo Jacks out of the Big A. 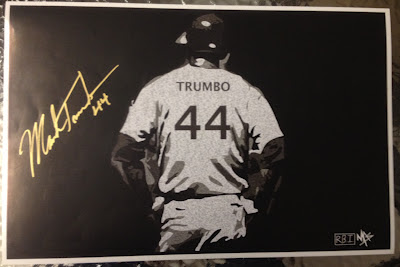 Despite being a budding young star who is very popular due to his breakout 2011 and All Star 2012, Trumbo is actually one of the best signers on the Angels, trying to do at least a few autographs almost every home game. Because he signs so much and I got him a few times last year, I've tried to avoid getting Mark to sign for me too much so he wouldn't burn out on giving me his autograph. I got this Mark Trumbo autographed custom 11x17 poster before a game at Angel Stadium.
Posted by RJ at 3:37 PM