Well Ray's starting pitcher David Price was right on awesome when he came out to sign autographs before a game against the Angels. Price was a stand up guy and very fan friendly when he came over before pre-game warm ups to sign.

Price was taken by the then Devil Rays with the 1st pick of the 2007 MLB draft. He has been a top of the line starter since he broke into the Majors with an electric debut making headlines in the 2008 postseason with dominating appearances. So far into his career he has continued that dominance being a 3-time All-Star (starting the 2010 game for the AL), and finishing 2nd in the 2010 AL Cy Young race while winning the Warren Spahn Award given to the top lefty in the bigs.

His career numbers so far have shown the Ray's 1st pick was a perfect one as he has a 55-30 record supported by a 3.23 ERA and 661 Strikeouts. Price continues to improve with every season and is only at his age 26 season in 2012 despite being a standout leader for the tough Rays staff. The Rays will have some difficult decisions to make as he approaches the 2013 off season with his first year of arbitration. 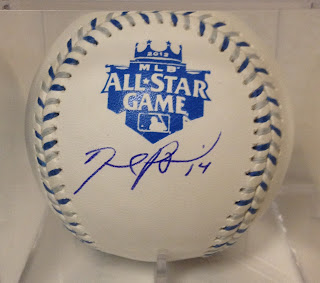 I was able to get David to sign this 2012 All Star Game ball right below the logo. I'm really getting into having commemorative balls signed and really liked this year's design. The blue stitching on the ball looks nice and I prefer the blue inked logo over the years it's black since I've seen some logos fade over time. Plus I think it's neat to have an All Star ball from the year that he won the Cy Young Award. Having an David Price autographed baseball is definitely something I'm very happy to have in my collection. 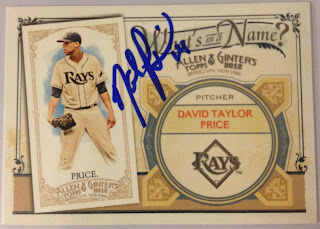 David Price also autographed this 2012 Allen and Ginter What's In A Name insert card for me. I'm a really big fan of these inserts because I think they're a perfect card. You have a almost full copy of a mini, the player's full name, and a nice font type with a good looking border on the sweet A&G card stock. It'll be tough to get a lot of these signed since they're mainly superstars but it'll be cool to see what I can get done.

Edit: Congrats to Price winning the 2012 AL Cy Young award, it makes me even happier I was able to get him this year especially on the 2012 All Star ball since it's the year he won the Cy Young. It's also the first time a Rays player ever won the Cy Young so congratulations to the franchise for scouting and developing such a strong player.
Posted by RJ at 2:55 PM