Once again a post with no fancy title for a guy who really needs none. Texas General Manager Jon Daniels is in all honesty a GM that I admire a lot and find inspiring. Hired by Texas as the youngest GM in MLB history at the age of 28 in 2005, Mr. Daniels has turned the ragtag Rangers into a contender.

Daniels began his baseball career as an intern for the Rockies in 2001 and at the end of the that season was hired by the Rangers as Assistant Director of Baseball Operations.  By 2004 he was promoted to Assistant General Manager and when the current GM John Hart stepped down became GM.

Daniels' style is aggressive and he is known for making plenty of headlines with big and unexpected trades and acquisitions. He has made landmark trades moving stars such as Alfonso Soriano, Mark Teixeira, and Adrian Gonzalez while landing Josh Hamilton, Cliff Lee, and Mike Napoli. He has been managing a farm system that has developed or produced Neftali Feliz, Derek Holland, Matt Harrison, Elvis Andrus, and Ian Kinsler. His moves have paid off after years of setting the stage to be a team that has had consecutive World Series appearances and is one of the most dangerous line ups in baseball. 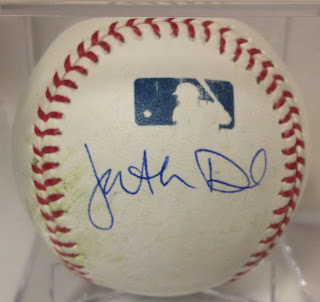 Mr. Daniels was in Anaheim to watch a recent Angels-Rangers series and I was able to get him to sign this ball tossed to me during BP by Tanner Scheppers when I saw him during the game. The sweet spot was a little rough and I thought it was a cool idea to have Daniels sign under the MLB logo since he is a GM and not a player.

This is one of my favorite autographs since I really do think it's amazing what he has accomplished at such a young age and now works alongside Nolan Ryan to churn out consistently strong teams.
Posted by RJ at 8:07 PM