This home stand I decided to continue with my latest project since this is the Angels' longest home stand for the rest of the season. Having already made a custom poster for slugger Mark Trumbo, I designed a poster for Angels pitcher and closer Ernesto 'Er-nasty' Frieri.

Ernie was a less heralded but very significant acquisition made by Angel GM Jerry Dipoto during the 2012 season to help stabilize the bullpen, stealing him from the San Diego Padres for Alexi Amarista. Frieri is a native of Colombia and I reflected his heritage when designing Ernie's poster in the color scheme using the same colors used in the Colombian flag.

Ernie's a big favorite around the stadium because of his fan friendly attitude, generosity during BP, willingness to sign, and breakout numbers. When Frieri was was acquired he set historic numbers by not allowing a hit or run in 13 innings in his first 13 appearances. He has thrived in the big pressure situations and even made the ballot for the Final Vote for the All-Star game but didn't stand a chance against Ranger's star Yu Darvish. Ernie's one of my favorite new players for the team and is the kind of personable guy that makes me know I'll root for him the rest of his career. 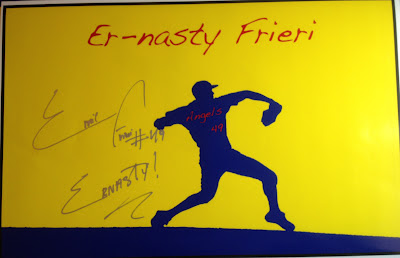 I think one of the best things about hunting autographs is the story behind every signature. Some are less personal but some are just great. This is definitely one of my all time favorite stories.

While working on the poster I took to twitter and tweeted the work in progress to him (Ernesto Frieri twitter is) @ernasty49 and was excited to see him reply that he liked it so I told him when it was finished I'd bring it to the stadium. Ernie and Peter Bourjos had a free signing together but I wasn't able to make it down since the poster wasn't ready for pick up from the printer. I took the completed poster down to the stadium and showed it to Ernie when he was out for BP.

When Ernie spotted the poster he jogged over to say hi and thanked me for making the poster. He did a quick fist bump before saying he couldn't sign during BP but after he would sign one for me. When BP ended he called out to me to head to the dugout. I started to walk toward the dugout but knew I was going to hit problems since I didn't have a ticket to get behind the dug out. Now being a usual at the stadium has some downsides occasionally since a usher immediately walked to me with his hand up and kept telling me to go back to another section very rudely. I tried pointing at Ernie and saying he told me to go there, but the usher wouldn't listen. Now the part that gets me is they never asked for my ticket. I actually have very good seats but because I'm there so often they assume I have bad seats and wander the stadium instead of having a very nice season ticket.

The usher repeated again to leave his section when Ernie walked up behind him and tapped him on the shoulder and told him to get out of the way. Needless to say the usher was very surprised and not happy but moved so I could talk to Ernie. I gave Ernie a copy of the poster for him to keep and he said thank you again before signing the poster with his full signature and inscribing "Ernasty!" under his name and number. I told Ernie thank you for giving me such a great signature and am very happy with how my Ernesto Frieri autographed poster turned out.
Posted by RJ at 3:46 PM