I was happy to see a response waiting for me in the mail that included a letter response. I opened it to see former starting pitcher Mr. Walt Terrell had replied to my TTM request.

Terrell was taken by the Texas Rangers in the 33rd round of the 1980 draft. He was traded to the Mets in 1982 and made his debut with the organization that year. It was the beginning of an 11 year career that would take him from the Mets, Tigers, Padres, Yankees, Pirates, and back to the Tigers to close out his career. He'd retire with 111 Wins, a career 4.22 ERA and 929 Strikeouts. He'd throw an astonishing 56 Complete games, 14 of which were shutouts, in his 294 career starts. 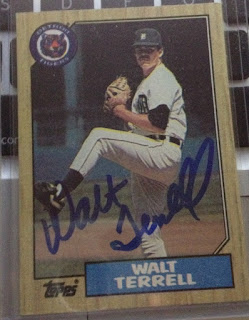 Mr. Terrell was kind enough to not only sign my 1987 Topps cards but also signed my index card and answered a few of my questions.

What was your favorite team to play for?
Despite playing for six teams throughout his career Walt said, "I enjoyed them all"

Who was your preferred catcher?
His career allowed Terrell to pitch to seasoned veterans Mike Fitzgerald, Matt Nokes and Mike Heath. Walt responded, "They were all very good and each had something unique about their game"

How did you find out you were debuting for the Mets in 1982?
I found this answer to be very revealing as research into this response told me that Terrell's time in AAA was spent learning how to prepare for the big leagues by former top flight closer of his era, "Tidewater coach Jack Aker told me" Aker set the single season saves record of his time with 32 in 1966. Such consistent performance and numerous appearances must have helped influence Terrell's readiness to go the distance and do what was needed for his 56 Complete Games.

Did you ever talk to Wally Joyner about the 9th inning hit?
On August 20th, 2986 Joyner came up to bat in Tiger Stadium at top of the 9th with 1 Out left before Terrell would cement his name in history with a no-hitter. The at-bat went Joyner's way and "We never brought it up"

It was great to get this response from Mr. Terrell after 16 days quickly from his home address.
Posted by RJ at 4:08 PM