Many of you have probably seen the fine posts posted by David and Matt about the event but I thought I would chip in my thoughts on the benefit. First off if you don't know who Cory Hahn is you should read a brief summary of his story which is truly inspirational.

Cory remains a fine symbol of inspiration and hard work and his steadfast resolve to recover is part of why the Trinity event is so popular. I'd like to thank the Trinity Bat Company and Mater Dei High School for their support of Cory and helping to create such a great event. Supporting Cory so he can continue to inspire those facing hardships through demonstrating his own determination. 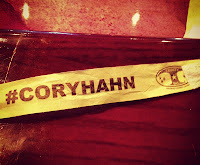 The event breaks down into a Home Run derby with different categories of hitters, highlighted by the pro division with real MLB players and minor leaguers taking swings. It's fast becoming a favorite event amongst autograph seekers considering the friendly atmosphere and timing during the off season. I know I definitely enjoyed last years event and this year was even better.

Players arrived to the event to a fairly large crowd of autograph seekers. Some were more friendly to the wave of cards, bats, and photos waiting for them while others wanted to get to the cages to warm up first before they signed. Trayvon Robinson of the Orioles was kind enough to sign for us walking in and you can see the crowd waiting for him. 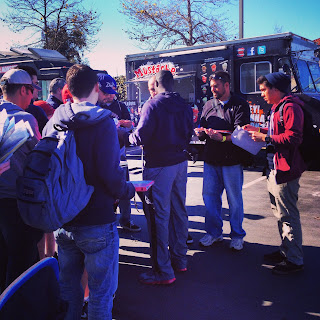 Kyle from Addictive Artwork was there with some of his quality paintings. You can see his work on his Twitter and see some very nice pieces that many pros have commissioned for themselves from Josh Reddick, Mike Trout, Hank Conger and Mike Adams. 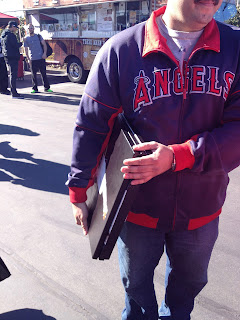 If you notice in the background there is a guy in bright green shoes, that'd be Daric Barton hanging out in the background waiting for some food from a food truck. I didn't get any food from that food truck but I did get a burger and root beer from the Burger Monster Food Truck. It was pretty delicious especially in the middle of a busy day. If you're in Orange County looking for a new tasty spot to try look up their truck on Twitter. 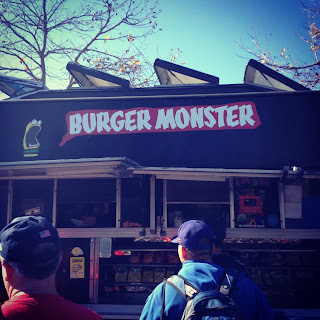 The event organizers set up a few tables to display Trinity bats, silent auction items, and for the players to have a designated signing area. Since I couldn't move in line and was busy handling my items when I got close enough you may be able to get a peek of Mark Trumbo getting ready to sit down to sign. 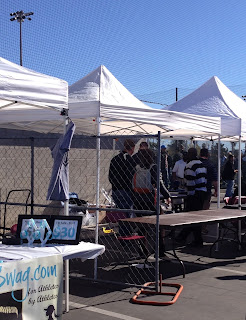 I thought I had come pretty well prepared for the event, but I was completely mistaken and overwhelmed by the amount of minor leaguers who were there to support the event. I had almost no supplies for them and wasn't sure who was who so I minimized my prospect graphing and stuck to what I knew. I think I came away from the event pretty well in the end.

On his way in I was able to get Trayvon Robinson to sign this 2012 Topps Heritage card. Trayvon is strictly 1 autograph per person especially since he takes the time to personalize his autograph. I know some collectors don't like it, especially since in Southern California there are plenty of dealers, but I enjoy that he wrote "To Ryan Best Wishes" 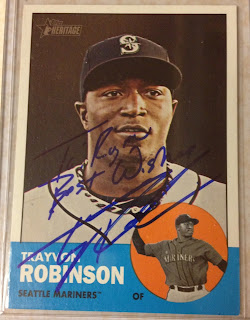 After Trayvon I was able to get Daric Barton to sign from the designated autograph table. He signed this sharp looking 2010 Allen and Ginter card for me and was surprised when I asked if he could inscribe his "Fielding Bible 2010" but was nice enough to write it for me. 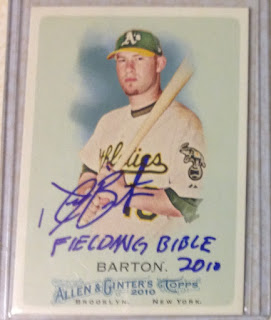 While waiting in line for Mark Trumbo I was able to get top Rockies 3rd base prospect Nolan Arenado's autograph on his way in. I'm not normally a big fan of prospecting but I think a 2 time All-Star Futures Game participant with tons of offensive potential was more than worth a ROMLB and he was nice enough to sweet spot it. I'm looking forward to seeing what he can do in the bigs with the Rockies. 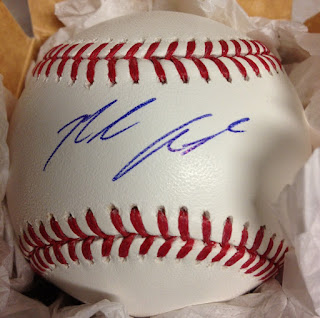 After I stayed in line for Trumbo I was able to get my moment with him at the front of the line when I handed him my custom bat to sign. I told him how I looked up a game used bat of his online and had my own Trinity pro model made to the same specs that he uses. He tried to check the nob but it was covered by a Trinity sticker so he actually put down the sharpie, took a half swing and nodded that the bat felt right. I was really happy to not only have gotten it made right but that the big leaguer I had it made to be like had swung it. Mark signed the bat and was nice enough to inscribe "All Star" for me. 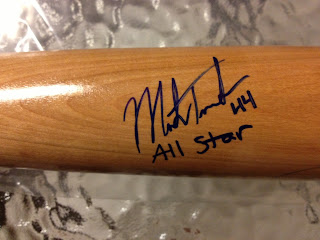 Following Trumbo, Dodger great Steve Garvey sat down at the table and he autographed my bat also. He was kind enough to inscribe "'74 NL MVP" underneath his name. 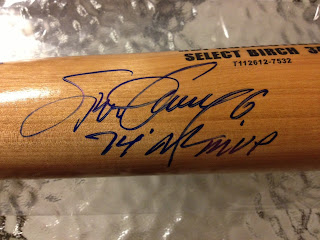 On his way out of the event I was able to get Ian Stewart autographed this 2011 Topps card. If you look up his past stats you'll see he put his Cubs number 2 instead of his Rockies number. 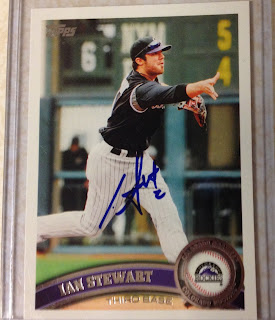 Also on his way out of the event I was able to get Steve Garvey again as he was walking with his son, prospect Ryan Garvey. Steve Garvey autographed this Gold Glove Baseball for me under the logo and I was happy to add another slick fielder to my collection of Gold Glovers on the special balls.

I'd like to note that Garvey showed a real sign of class agreeing to come to the event and sign seeing as he was leaving the charity benefit to go sign at a paid signing. Not many players do free signings let alone on the same day they could be charging their fans. I really appreciated him making this appearance. 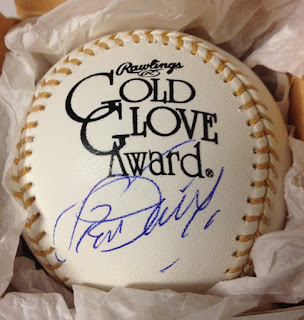 After Garvey I was able to get one of the prospects who made an unexpected appearance at the event. Padres No. 1 pick in the 2012 draft Max Fried come to show his support and he was nice enough to inscribe "#7 Pick" on a Trinity business card. 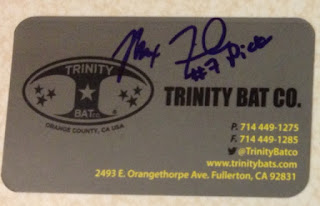 The last thing I got for the day was one from none other than Cory Hahn's autograph. 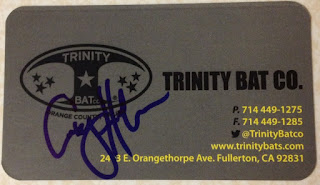 It was a great event and I'm very happy with how everything went. I know most graphers tend to walk away from events like this with racks of balls and pages of cards signed, but I prefer the one or two approach with the nice inscriptions for my collection.

The Trinity Bat Co. has definitely made a lasting mark with big leaguers from the high quality of their bats and events. I don't think anyone left with anything but the best experience. I'm glad to report that the whole event raised more than $10,000 for the Cory Hahn Fund and I'm proud to have partaken the past two years.
Posted by RJ at 10:12 PM