There are times where autograph collecting and TTM can be pretty defeating or discouraging. Athletes today often don't sign for fans anymore, but every once in a while you hear about a player who goes above and beyond for the fans. Even more rare are those players who are so friendly AND are fantastic top level players. You've heard my stories about David Price, but a TTM signer who I've learned is pretty reliable and being amongst the top of the league is closer Craig Kimbrel.

Kimbrel was taken by the Braves in the 3rd round of the 2008 and debuted as a September call up in 2010. After that the story was over for other teams when it came to the 9th inning with Kimbrel quickly becoming one of the most dominant closers of his generation. He won a unanimous 2011 NL Rookie of the Year Award and was a member of the All Star team. He gained his 2nd All Star nod in 2012 on the way to the NL Rolaids Relief Man as the best reliever for the year. Both seasons had him lead the NL in Saves, while in 2011 he established the MLB record for most saves by a rookie. That is a record I find highly difficult to believe will be broken seeing as 46 Saves by any closer is an elite year let alone by a rookie. In 3 seasons so far Kimbrel has a 1.46 ERA, 89 Saves, and 283 Strikeouts in 160.1 innings. In 2012 Kimbrel was so dominant that he became the first pitcher in MLB history to strikeout more than half the batters he faced. It's scary to think he's only 24 and already accomplished so much. So long as he remains healthy the Braves have found a true crown jewel to lead their bullpen. 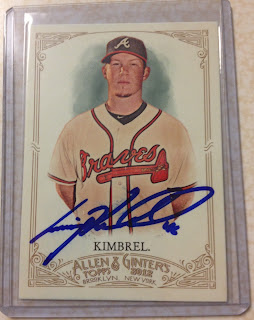 I was very excited and happy to open my envelope to find this 2012 Allen and Ginter card autographed by Kimbrel after 86 days c/o the Braves. This was part of my 365 challenge and is the 24th autograph response I received.
Posted by RJ at 12:36 PM