I've got to make one thing clear, I very much enjoy working on my 1987 Topps set. I'll obviously never finish it considering there are a substantial number of non-signers, expensive Hall of Famers, and players/managers who have passed on but I enjoy the long arduous task. Maybe one day I'll be close and have hit the lotto so I can buy the missing cards but for now it's all in good fun.

One of the latest 1987 Topps cards I was able to get signed TTM was by pitcher Dan Schatzeder. Dan was taken by the Montreal Expos in the 3rd round of the 1976 draft. He debuted in 1977 for the Expos at the age of 22 and continued playing for 15 seasons retiring finally after the 1991 season. He played for the Expos, Tigers, San Francisco Giants, Phillies, Twins, Indians, Astros, Mets, and the Royals. He was  traded from the Phillies to the Twins during the 1987 season and went on to win game 6 of the '87 World Series for the eventual champion Twins. When he retired Schatzeder was 69-68 in 121 Starts and 383 relief appearances. He had 10 Saves and 18 Complete Games tossed in amongst all of his appearances, supported by a career 3.74 ERA and 748 Strikeouts. 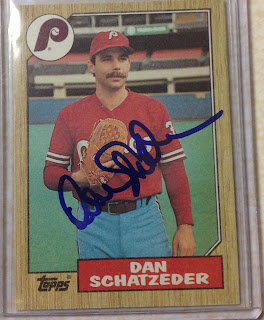 Mr. Schatzeder was kind enough to sign this 1987 Topps for me from his home address after a 41 day turn around. Pretty quick considering I sent it to him during the holiday season, and is the 25th return of the 365 challenge.

One further note I really enjoy the '87 Topps considering how well they sign as cards and the plethora of great mustaches you see players rocking in their cards.
Posted by RJ at 4:01 PM