Well folks it's the first week of 2013. The 365 challenge has officially come to a very unsuccessful finish. The words "utter disaster" come to mind, but it'd be a little harsh and discount the kind responses of the letters I sent that did returned.

Of my hoped 365 letters I sent out 91 letters to current players, executives and retirees of the game. My 91 is only a 19 letter improvement from last years numbers. To make matters worse of the 91 letters that I sent out I only received 23 responses. In 2011 I sent out 72 letters with 31 responses.

I came to some realizations though as I did this challenge:

The entire process becomes cumbersome when I have to choose a player, research them, write them, write a blog post explaining why I wrote them, update the ttm page, update the 365 challenge page, link all the appropriate pages and then finally get to mail my letter. And then blog about any response.

The sheer prospect of such time consumption made me grow a genuine distaste for really getting into any sort of significant letter writing kick.

I got into TTM because I truly enjoy baseball. I want to learn about the history of the game and it's many facets from the men who played the game. Trying to hit a specific number of letters sent out while maintaining that integrity without making it a mechanical process was too difficult.

I also came to the realization that it's a semi expensive hobby when you start cranking out those kinds of numbers. Postage for the letter to the player and your return envelope? Envelopes themselves. Index cards. Baseball cards for specific players. Cheap it was not. I'm not saying it broke the bank, but I realized as I dropped twenty after twenty at the post office that I should at lease be enjoying the process more for what I'm spending.

Yes I'm still pissed about this.

Number 4: There are some people out there in the baseball world that don't suck. Al Kaline take note.

Now I honestly do appreciate every single TTM response that I have ever gotten, but those individuals have definitely gone above and beyond to help a stranger learn a little about the world of baseball.

Number 5: I will try again.

That's right. Despite all the negatives I've listed it was an experience. There's something magical about a no-hitter. The anticipation of every pitch. The holding of your breath when you hear the bat connect to the ball and you can only watch to see if someone can make a play on it. It's a question if can he go the distance. Will time and circumstance come together for something special to happen for 9 innings. I took my no-no to the 3rd inning. Maybe not in 2013 but one day I'll step back onto the mound and see if I can go the distance. 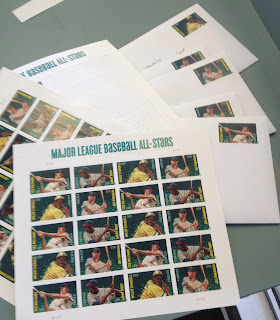 Email ThisBlogThis!Share to TwitterShare to FacebookShare to Pinterest
Labels: 365 Challenge