Big Papi. There's only one and he really doesn't need too much of an introduction. I was able to get a David Ortiz autographed baseball, and am thrilled about it. As a big Red Sox fan this is definitely going to be one of my all time favorites and something I always hold on to.

He's had countless All Star appearances, Silver Sluggers, the Hank Aaron award, the Edgar Martinez award, won the Home Run Derby in 2010 at Angel Stadium, and been a key part of the Red Sox 2 World Series championships in 2004 and 2007. I'm proud to say I was able to be there in person for Game 1 of the 2007 World Series and watched him win the 2010 Home Run Derby. Since leaving the Minnesota Twins for the Red Sox he's become a fan favorite and a dominant force in baseball as one of the most effective and feared Designated Hitters in the game.

With over 400 career Home Runs and closing in on 2000 career hits he's going to be an interesting case when it comes time for Cooperstown voters to make a decision on David Ortiz in the Hall of Fame. He's decidedly one of the top sluggers of the game, been a key to a decidedly historic ALCS and World Series run. He's popular with the media and fans so it'll be interesting how long he remains on the bubble to go in and what the final decision is. 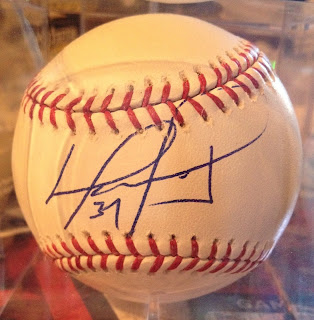 I was able to get this David Ortiz autographed baseball when the Red Sox were in town to play the Angels during the 2013 season. Stay the same forever Papi.
Posted by RJ at 9:54 PM