Even though he's still relatively new to the game I'm not sure I need much more of an introduction for Cuban slugger Yoenis Cespedes. After putting on an absolute clinic on his way to winning the 2013 Home Run Derby everyone is taking note of the Oakland A's hard hitting outfielder.

Cespedes defected from Cuba successfully in the summer of 2011 after multiple attempts to reach the United States. After his defection he signed a 4 year 36 million dollar contract with the Oakland A's. He debuted in the 2012 season and if he hadn't come onto the scene at the same time as divisional rival Mike Trout he would have easily won Rookie of the Year after powering the A's to relevance. It had often been wondered what Billy Beane could do with the A's if he had a little more money to throw at a bat and his savvy trades and big investment in Cespedes paid off for a 2012 Divisional title and a contending 2013 team. 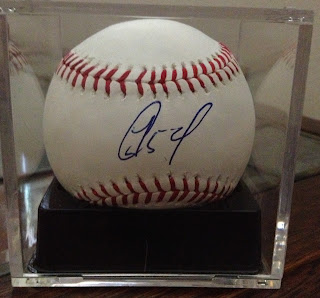 I was able to get this Yoenis Cespedes autographed baseball during the 2013 season when the A's played the Angels at Angel Stadium. Yoenis was really nice to the fans, posing for photos while signing a healthy number of autographs. I was really surprised that he was so willing to sign at the first series since winning the 2013 Home Run Derby since many players would hold off until they could get a payday for it. I'm not sure if he'll be in the derby again considering the wrist injury he suffered immediately  when he returned to action for the A's so it's nice to get him to sign so soon after winning the derby against Bryce Harper.
Posted by RJ at 5:30 PM