The past few months I've given up on any TTM activity. I've gotten no responses or even return to senders so I could at least reuse my smaller return envelopes. Literally I felt like I was just throwing money out the window. I did finally receive a response recently and I will use it as some motivation to throw a few more letters out there into the world.

Former pitcher Carl Pavano responded to my TTM request and recharged my batteries to send some more requests out. Taken by the Red Sox in the 14th round of the 1994 draft Pavano was featured in the trade that sent Pedro Martinez to the Sox and him to the Expos, debuting in 1998. He had a strange history with the Yankees, but his career was highlighted by winning the 2003 World Series with the Marlins, and being a 2004 All Star. He retired with a wining record of 108-107 supported by 1091 Strikeouts. 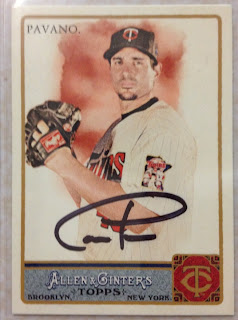 Pavano responded to my TTM request I sent to him care of the Twins after 1 year 5 months. I'm glad to add this Carl Pavano autographed 2011 Allen and Ginter card for me. It's the 28th response I got back from my 365 challenge.
Posted by RJ at 4:18 PM