Lynn was drafted by the Red Sox in the 2nd round of the 1973 MLB draft out of USC. He debuted for a cup of coffee in 1974 and then went on to have a historic 1975 becoming the first player to win the AL Rookie of the year and AL Most Valuable Player award in the same year. His career continued on for the California Angels, Baltimore Orioles, Detroit Tigers, and San Diego Padres with him hanging up his glove after 17 seasons in the bigs. His career .283 average drove 1111 RBI, crushed 306 Home Runs and supported a .360 OBP. He to go along with his AL ROY and MVP awards Lynn was a 9-time All Star and a 4-time Gold Glover. 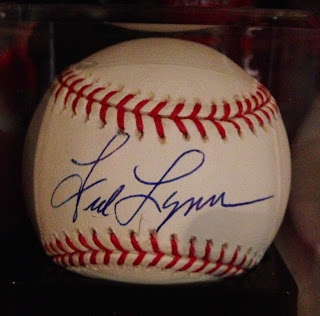 I was able to meet Fred Lynn twice. The first time I met him as part of the Angels 50th Anniversary celebration where he was only signing Angels promotional hats and no outside items. It was pretty disappointing to me about that since I knew Lynn would be there and had worn my Red Sox jersey for the occasion even though the Angels weren't playing the Sox that game.

I heard from a friend that Lynn was in attendance at an Angels game during the 2013 season and kept an eye out for him the whole time I was at the game. I caught him by myself while he was leaving the stadium and told him about the merciless heckling I got for wearing my Sox jersey to meet him in 2011 and he showed me he appreciated it by agreeing to sign my ball on the sweet spot then shaking my hand and saying a few kind words for wearing the jersey last time to meet him. Awesome. I'm really happy to have ran into Mr. Lynn again and I've very proud to have a Fred Lynn autographed baseball in my collection.
Posted by RJ at 10:38 PM