This is definitely going to be one of my all time favorite pieces. I haven't gotten many autographed jerseys but the ones that I do have are all of players who are personal favorites of mine. When I went to college Boston I picked up a few extra shifts at my job to work my way up to a nice jersey to wear when I went to Fenway park for a game. All my hard work paid off when I was able to afford a Dustin Pedroia jersey that has become a Dustin Pedroia autographed jersey. 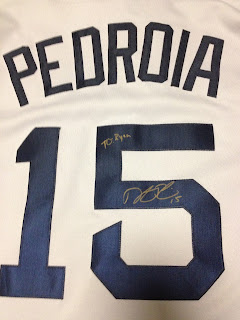 I was able to get Dustin to autograph my jersey when he was in Anaheim with the Red Sox to play the Angels during the 2013 season. It's a great autograph to add to my collection and made even better when you compare it to some of his others you see that it's his tough to get full signature that isn't so scrunched up and includes the dots with his jersey number. Getting this jersey signed the same weekend I was able to get a David Ortiz autographed baseball on the sweetspot made this an awesome series for me this year.

As some of you know I've been working on getting autographs on my authentic Fenway Park seat, unfortunately the powers that be at Angel Stadium decided that my seat was no longer something I could take into the park. This is only going to make working on the piece even harder and I'm concerned I won't be able to get any worthy signature on it this season. Thankfully I already got Pedroia's autograph on it so now I have two great pieces signed by him as well as a autographed Topps card I picked up at the 2010 All Star Game Fan Fest as a souvenir.
Posted by RJ at 11:45 AM