Previously I was able to get a Josh Hamilton autographed World Series baseball when he was with the Texas Rangers. Since coming over to the Angels I hadn't been able to get Hamilton to sign for me, which was really disappointing seeing as I like the former AL MVP and heard he was a reliable signer. I was however finally able to get Hamilton's autograph on the 4th of July. He signed for a good number of fans taking the time to switch to the appropriate pen or marker for people who came up to him asking for an autograph. He actually took my pen and knocked out a few autographs before he signed my baseball since the people asking for him to sign were trying to hand him a sharpie. I always like when I see a player doing that to make sure their autograph comes out nicely for the fan, and it's even nicer when the player signing is a player of that caliber. 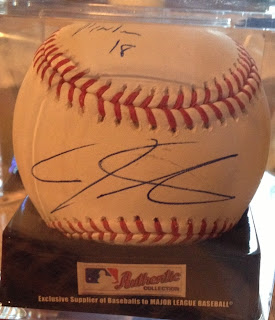 Hamilton is known for signing for the fans and inscribing a bible verse when he gives out an autograph, on this sweet spot baseball he inscribed "Psalm 18" I was glad he put the inscription on the ball since the World Series ball didn't have one and it's a big part of his signing habit so I felt like my collection needed an inscribed Hamilton to be more complete.
Posted by RJ at 7:02 PM