One nice thing about being a grapher based in Southern California is the amount of signings in the area and the quality of team demanded by the fan bases. Right now the Angels are loaded with talent and sought after autographs, none more than rising superstar and now two time All Star Mike Trout. I've posted before about getting a Trout autographed 8x10 photograph and pulling my Trout Bowman Platinum but I was able to add another Trout autograph to my collection.

Even though I had gotten him on my 2011 team ball I needed to add a solo signed Mike Trout autographed baseball. I'm not sure you can ever really have enough Trout considering only two full seasons into his career he's a multiple time All Star, American League Rookie of the Year, and won a Silver Slugger. That's more hardware than some guys get their entire career and he's barely starting into his. 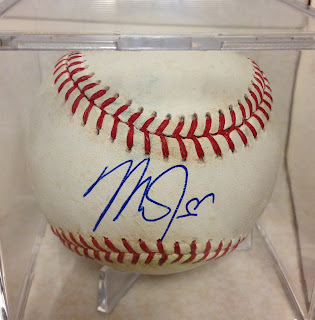 I was able to get this Mike Trout autographed baseball on the sweet spot at Angel Stadium before a game during the 2013 regular season.
Posted by RJ at 5:05 PM