I started the day meeting up with Al and Benson to head down to San Diego with the goal of getting Matt Harvey's autograph. That was mistake number one. We went to the game when Zack Wheeler was pitching, and David Wright doesn't travel with the team right now so there was only one guy we were really trying to get the autograph of. Always a recipe for disaster.

We parked and walked around the stadium trying to figure out the best spot for us to hang out to get incoming players. We picked the right spot if you can't tell by all the other graphers that showed up waiting for players to show up to the stadium. If you want to ask them any questions when you get there, don't bother. 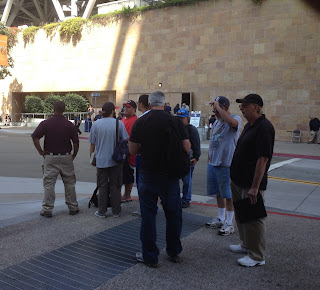 It didn't matter though if players came by because the guys down here have no clue who anyone is. They'd flip through their phone while people walked by trying to look at rosters to figure out who the guy 2 feet away was. Repeatedly they would walk to someone with their books of cards ready only for the person to be either A) the wrong player or even more frequently B) a regular person walking down the street. I saw them go up to joe citizen 3 times ready to graph them.

While we watched Kyle and Matt showed up to join us so there was a healthy number of real graphers there to go to work. I was able to get this John Buck autographed 2012 Topps Heritage card to start the day. Al and I were the only ones to get him since the SD graphers had no idea why we were walking to  him. 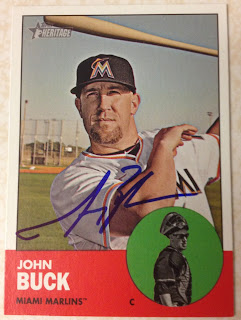 After Buck Benson and I spotted Andrew Brown showing up to the stadium with a friend but we had nothing for him. Unfortunately the regular SD graphers were busy not paying attention and didn't even notice him despite having cards for him. They also didn't notice Ronny Cedeno walking through the group to get inside until Benson said something, but once again we didn't have anything we wanted signed by him.

A player showed up and we went closer to figure out who he was. We tried to take a glance at someone's book who was getting a card sign and AFTER he got the autograph he noticed us trying to figure out who it was and flipped his book around with his arm over it so we couldn't see. Really? You already got the autograph. Us getting a signature would have no impact on you whatsoever and in the end we didn't even have a card for the player. Why? Because it was Carlos Torres. Someone who is barely hanging around the majors which is why 5 serious graphers weren't able to figure out who he was. Nice etiquette and great pick up San Diego graphers. That's why I'm making this post.

Eric Young Jr. autographed this 2012 Topps after he showed up to the stadium. Cheers to him becoming the 2013 NL Stolen base leader. 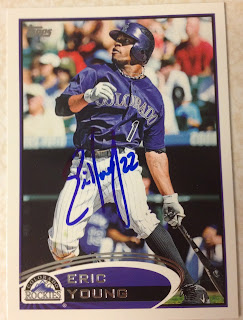 Matt Harvey shot us down later in the day after we ran into him by the stadium while we were out going to get some food thinking he had already come in earlier in the day.

We went inside the park hoping to get him. After getting good positions above the Mets dugout Matt convinced Terry Collins to sign and our group racked him before the SD graphers were able to get one. I didn't have anything for him that I wanted signed so I called out to him since I didn't get an autograph if I could have a ball. He laughed and asked if I wanted them all but I said one would be fine and tossed me this Mets commemorative logo ball, in a good nature way saying he was done with favors for all 40,000 fans. 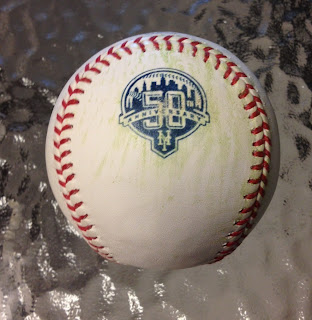 Harvey came in early from BP with a trainer looking irritated and didn't say anything when we asked if he could sign and we're thinking he tweaked something while running. The Mets ended and we went over to Padres side to get some more autographs since we had made the drive down and they sign down the line. 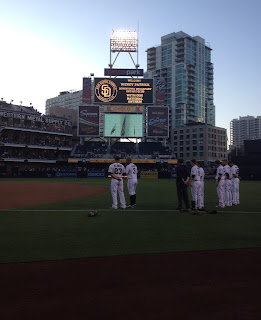 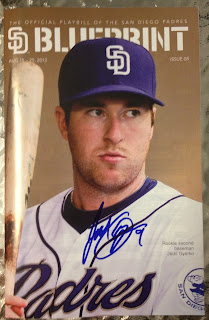 After Gyorko signed Casey Kelly came over and was signing but I already got his autograph at Padres Fanfest. Chase Headley autographed this 2012 Topps Heritage base card. 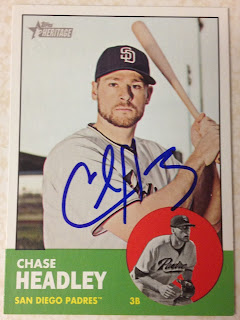 Since I had it even though I'll never finish I also had Chase Headley autograph this 2013 Topps Heritage insert. 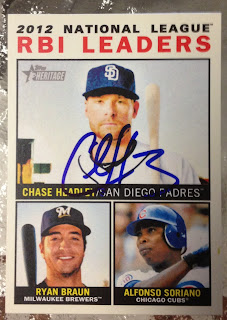 And Yonder Alonso autographed this 2012 Topps Heritage base card with his terrible autograph in a black sharpie. 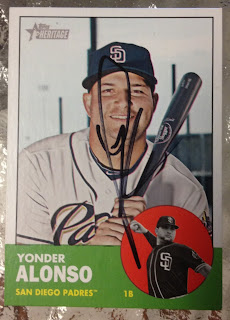 So after showing up to San Diego for the first time to graph I knocked out 6 autographs and a baseball. That's the closest I'll come to saying how to get an autograph at Petco park from visitors or from the Padres themselves. I If you want to get an autograph in San Diego didn't do all the work for you, but there's enough that you should be able to figure it out. In the words of Ron Burgundy, Stay classy San Diego.
Posted by RJ at 2:47 PM