I was pleasantly surprised to see one of my 365 TTM's come back after a long delay. There was no postmark on it so I wasn't sure who had finally responded. When I opened the envelope I was happy to see Jim Leyland signed my card.

Leyland is notorious for chain smoking during games inside the dugout but not many people complain considering the results he's been able to get as a manager. He's won more than 1750 Games, was 2-time NL Manager of the year, AL Manager of the Year and won the 1997 World Series to give the Florida Marlins their first franchise World Series championship. As Detroit's manager he's had another World Series appearance and been one of the more humorous managers in the game. He's quoted as commenting on Orioles stud Manny Machado that he's the league leader of doubles and Leyland is second in doubles, double vodka's and double scotches. 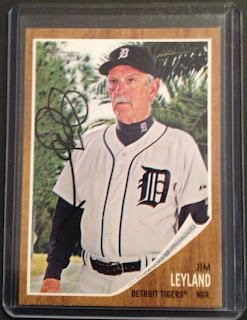 Jim Leyland autographed this 2011 Topps Heritage card for me that I sent TTM c/o the Tigers at Comercia Park after 1 year and 4 months.
Posted by RJ at 9:42 AM