I was very happy to get a Terry Francona autographed baseball to add to my collection. It took a few attempts with him as an analyst, Red Sox manager and as manager of the Indians but I was glad to get a ball signed by Francona in my shelf.

Francona is one of the top autographs for me in Red Sox history since he is the manager that was able to break the curse and bring a World Series championship to Boston. He not only broke the curse but also won the 2007 World Series making himself a key part of the Red Sox dynasty. The infamous breakup of the clubhouse cost him his position in Boston and after some time away from managing he has helped turn the Indians around. He's crossed the 1,000 Win plateau and earned two rings, he's definitely one of the top managers in the game. 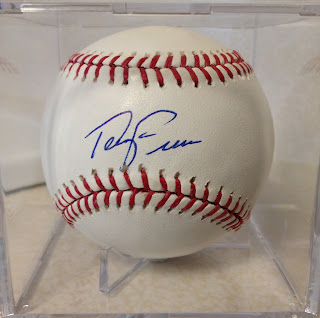 I got Terry Francona's autograph on this baseball when the Indians came to play the Angels at Angel Stadium during the 2013 season. I had sent a card to Tito during the 365 challenge that I wasn't able to get back so it really means a lot to put this in my collection. I think I'll be trying to get a copy of Francona's book autographed next season and work on getting Francona's signature on my Fenway Park seat.
Posted by RJ at 4:16 PM