Every time AJ Pierzynski comes to town he is met with a constant stream of boos when he's announced in the line up or comes up to bat. Most Angel fans don't actually remember the controversy that led to the booing but just join in because their "supposed to" dislike him. It breaks down to a controversial 2Out 3rd strike in the 2005 ALCS that should have sent the game to extra innings and instead allowed a runner on base for the White Sox to win the game. The White Sox went on to win the series and win the World Series that year.

Taken by the Minnesota Twins in the 3rd round of the 1994 MLB draft, AJ's been a consistent contributor for the teams he's been the backstop for. Since debuting in 1998 he's caught for the Twins, Giants, White Sox and Rangers. AJ has been a 2-time All Star, Silver Slugger and was a key cog for the White Sox 2005 World Series Championship. He's knocked in more than 700 RBI's, crossed 150 Home Runs and 1700 hits. Impressively he's been on the receiving end of Mark Buerhle's no-hitter and caught Phillip Humber's Perfect Game. 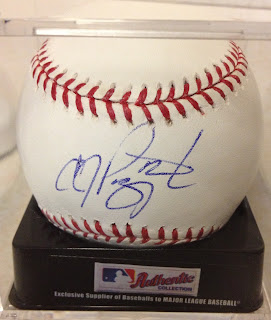 I got this AJ Pierzynski autographed baseball when the Rangers came to Angel Stadium during the 2013 season.
Posted by RJ at 4:41 PM