In the 3rd round of the 1995 MLB Draft pitcher Ryan Dempster was drafted by the Texas Rangers. He was traded to the Florida Marlins and debuted in 1998. He's played for the Florida Marlins, Reds, was a longtime fixture for the Chicago Cubs, Rangers and currently the Boston Red Sox. His career has had him bounce between the bullpen and rotation. He's had some strong successes in both roles being a 2-time All-Star, crossing 125 Wins and most impressively crossing the 2,000 Strikeout mark. 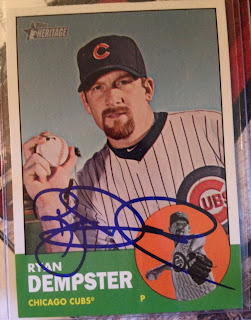 I was able to get this Ryan Dempster autographed 2012 Topps Heritage card before a game when he came into town the Red Sox to play at Angel Stadium during the 2013 season. He was really nice and took the time to knock out autographs for all the fans waiting before going inside the stadium. If I had realized he was going to cross the 2,000 Strikeout mark I would have dropped a ball on him but I'm glad I was able to get the card done at least.
Posted by RJ at 4:18 PM