I finally decided to go into LA to go check out the legendary Drew League. David and Benson have been telling me about how cool its been this year and with the playoffs here I decided to end my summer with some fun getting autographs at the Drew League.

If you plan on going to the Drew League you need to get there early, it gets packed quickly and once they're filled they're filled and you can't get in. I opted around that since this was my finial summer autograph adventure so I decided to donate to the Drew League foundation and secured myself an assigned seat courtside for the day. Beyond graphing I was really looking forward to catching some playoff basketball with top amateurs, European league players and NBA pros. The way I looked at it, when else would I ever be able to sit court side next to some of these players.

The first game I caught had Baron Davis on the court having a good time. 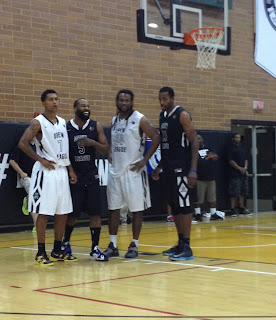 After his game I was able to get this Baron Davis autographed 8x10 photo from his time with the Golden State Warriors. 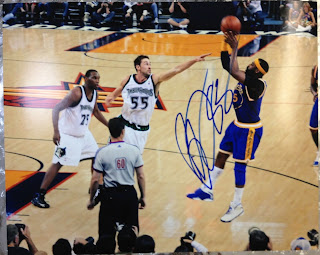 After he signed Baron was super cool taking photos and saying hi to everyone as he hung out to watch some of the other games. He even took a camera himself to record some of the games and interviewed some of the other NBA players who showed up. Tayshaun Prince showed up to just watch a few games and I got a photo with him, but he didn't seem very happy about it. I didn't have an 8x10 but Brandon Jennings showed up to play and led his team to a win. Then Davis went and interviewed Kenyon Martin who showed up to watch former teammate NickYoung's MHP play. 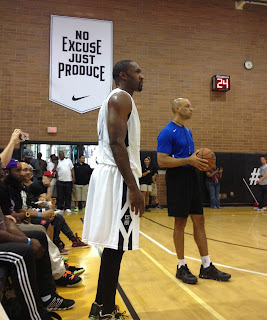 Young and teammate Gilbert Arenas almost beat LAUNFD but Areanas missed a game tying free throw in the final seconds to give the ball back to LAUNFD for them to score on the final possession. Arenas disappeared after the game but I was able to get Nick Young to autograph this 8x10 photo of him laying down a dunk for the Wizards in front of Ron Artest. After getting Nick Young's autograph I got a delicious grilled beef hot dog and some Drew Aide on David's recommendation. One word. Delicious. Brandon Jennings even got in line to get the same thing. 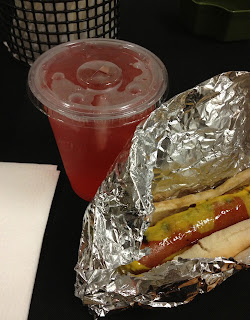 There were some good games throughout the day but the main event was the Money Gang's playoff game. The Game shot me down when I tried to get his attention after MHP's game and he was just walking around the gym and talked to actor Omar Miller who showed up to watch. Ron Artest aka Metta World Peace showed up to play for Money Gang but bolted through the gym with security. The top surprise though was James Harden showing up to play. 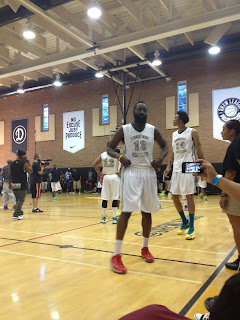 Harden, Artest and Game tried to get it done but they weren't able to pull off a win despite Harden having a chance at two quarter ending baskets. I was however able to get this James Harden autographed 8x10 photograph from his time with Team USA. 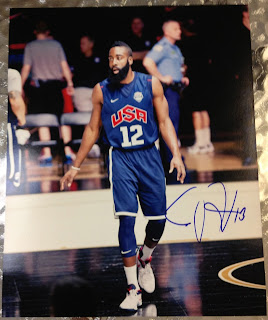 Big thanks to David for the tip that Harden won't sign anything from his time with the Thunder since that's what I probably would have printed. When I asked Harden to sign he looked at me then leaned in to check what photograph I had of him then nodded and reached out to take the photo and sharpie. I'm really happy to put a James Harden autograph in my NBA collection and he's definitely the best player in it by far.

Going to the Drew League playoffs was definitely an awesome way to end my summer and it's something I'm really glad I did. I wasn't able to get everyone but getting Nick Young, Baron Davis and James Harden autographs at the Drew League were worth it besides being able to watch some great basketball.
Posted by RJ at 4:47 PM